Perhaps not a fashion, but it is worn… Moved by the tragedy of the Titanic, Norwegian-born former sailor (who had been shipwrecked three times), John Edlund (1874 – 1957), invented a personal life saving device and patented the idea in 1915.

Edlund created his idea when he was living in Claresholm, Alberta – about as far from an ocean as you can get. The device doubled as a valise when not in use for lifesaving. Unfolded, the passenger could climb in and then walk into the water from the ship’s deck – seeing their way through a small glass looking-hole. Edlund was offered a fee for his design, but he turned it down to pursue his own marketing campaign. The idea was profiled in many publications in Canada and the U.S. and there was some interest in it during the Great War, but the idea eventually sank. 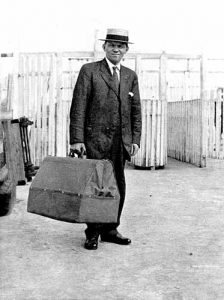 The device doubles as a useable valise 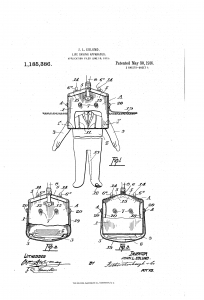 Patent papers for the device 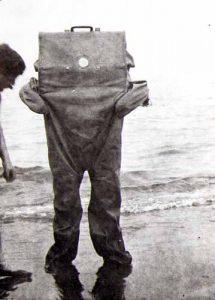 Gear on, ready to plunge 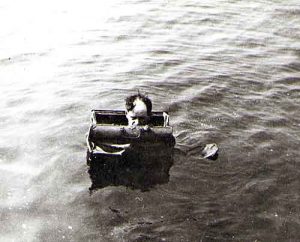 Demonstrating that it works Here is a topic I have been both anxious to comment on and avoiding for a very long time because I know there will be dissent.

I vividly recall watching A Night to Remember on television in the late 1960s and being mesmerized by the story. Since then I have watched nearly every film on the topic and read many books and accounts. I don’ t know if I would qualify for geek status on the topic, but I know my way around the facts and fictions of the event.

Admittedly, I prefer a real story to a made-up one, so I can’t fathom why any writer would miss the opportunity to retell some of the fascinating stories that surround the Titanic. I really hated the 1997 version of Titanic by James Cameron because it was such a waste of the beautifully recreated ship interior. The costuming was great if you focussed only on the extras – the principal actresses all looked like tarts with inappropriately dyed henna red hair, too much make-up and age inappropriate evening gowns. Another film, also called Titanic, from 1953 also used a fictitious storyline set to the real disaster but it’s been so long since I have seen it I don’t remember the particulars other than Clifton Webb’s stiff upper lip…

And now we have a new version, also called Titanic, written by Julian Fellowes.

The show debuted in Canada the night before last, and I wasn’t sure if I was going to appreciate it or not, partly because it was being told in four parts, which is annoying, and also because it was written by Julian Fellowes. He is the author of one of my favourite movies – Gosford Park, however, he is also the author of Downton Abbey – sorry, not a fan. I find it too soapy (complete with amnesiacs and cripples who can suddenly walk…) and the costuming is inconsistent and does not portray the level of wealth a family like the Crawleys would have had (this is a wealthy family with a huge country estate, and fashion was not just a privilege, it was a responsibility of their position.) The fashions are mixed from different periods which simply didn’t happen at that time, especially not from that class; anything more than one season out of date would have been remade, given to servants or charity, put away for sentimental reasons, or stowed in the dress-up box. There are also historical inaccuracies, not just with the costuming but also with language and deportment. That is why I was worried Titanic would simply be ‘Downton on Ice,’ However,  I can happily report that this is not entirely the case.

Titanic 2012, Dancing on the first night of voyage, the costumes are good, even if the deportment is not - a man would not have his jacket off in the presence of ladies in 1912

Much to my surprise, the costuming of Titanic is quite good – even sometimes excellent. The costuming was done by James Keast who does a lot of British television movies and series. I am most familiar with his work on the series The House of Eliott – a yawny costume drama of over-acted angst, but the costuming was fabulous.

Online I found an interesting interview with James Keast regarding his approach to Titanic: “It’s about real people in real clothes, rather than costumes. It’s about the use of fabric and the way things fit. It’s about not over-designing things and about keeping it simple… It’s not really an opportunity to show off as a costume designer, designing 50 evening dresses. It’s about making the evening dress fit the character. So I always start from the character and go from there… ”

Keast says finding references for the uniforms of the officers wasn’t difficult but finding what “…the stewardesses, stewards and all the other people who work on the boat that’s been difficult to find…“But I have actually managed to find some reference for stewardesses.”

Titanic, 2012 - The servants of the wealthy - one angle not previously seen in the many versions of the Titanic tragedy

In regards to depicting the various classes on board Kearst says “That’s a difficult one. You find that people save up and try and wear their best clothes. What I’ve tried to do to make a difference between the classes is a lot to do with the fabrics that I’ve used and the size of the hats. You tend to find that the higher up the class system you are, the bigger the hat you’ve got.” Kearst needed to create around 1,000 outfits for principal cast and extras. For the actors who are in the water Kearst says “I have to make at least three of each of these outfits because we might have to do it more than once. I’ve chosen fabrics that can be repaired, as it were, and dried quickly. We’re normally here for up to two hours after we wrap, washing things and making sure they’re on their way to being dry.”

Unfortunately, the costuming of Titanic is the only reason to watch this series. The rest of the film suffers from the same ills that befall Downton Abbey –  historical inaccuracies in terms of attitude, manners, deportment, language, and class relationships. Its too bad Merchant Ivory didn’t do a version of this story because period mannerism and language was something they excelled at. Titanic also suffers from having too many characters, an overly convoluted storyline that moves too quickly, and unnecessary conversations about details such as a discussion about why they are not dressing for dinner on the first night – something everyone would have known  at the time, and is still the norm for cruises. If I had to pick, I would still go with 1958’s A Night to Remember but just for the story (the costuming is heavily influenced by 1958 – there are a lot of Princess line dresses worn over uplift bras and under mink stoles.) If you could take the costuming from the current Titanic, put it with the sets from James Cameron’s Titanic, and use an updated storyline from A Night to Remember – now THAT would be a good movie.

One of the better films is the oft-overlooked television movie from 1979 S.O.S. Titanic. The costuming was by Barbara Lane, who also did the costuming for Heat and Dust, and the most recent and best version of the Diary of Anne Frank. S.O.S. Titanic has a good balance between authenticity and atmosphere. The story is based on real people’s accounts and what is especially nice is that the story is told primarily from the point of view of two Second Class passengers, and that’s refreshing.