This was just one of the many 1930s and 1940s French magazines, which included a near complete run of wartime L’Officiels, that were stolen from us five years ago. I have a good idea who took them (we had some people who usually worked in theatres building sets, helping with the renovation and painting of our house at the time.) I was really angry and depressed about the essentially irreplaceable loss of reference material for years, but now I just hope that they take care of them. It was a life lesson… 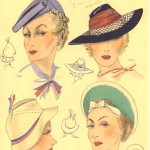 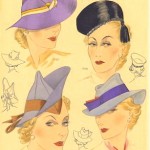 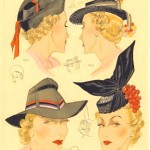 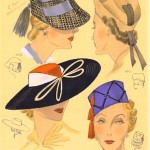 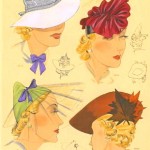 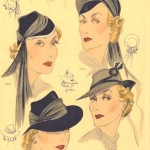 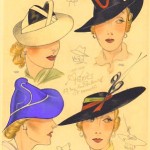 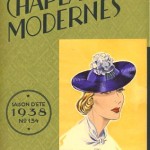 While I was researching my book ‘Forties Fashion: From Siren Suits to the New Look’, I ran across an interesting tidbit but I couldn’t find the right place to fit it into my text. Last night I watched Charlotte Gray, a film about a fictional Scottish woman who volunteers for the SOE (Special Operations Executive) during World War II. I was reminded of the tidbit I didn’t use in the book, so here it is…

The British clothing coupon scheme and the Make Do and Mend promotion came from the office of Hugh Dalton, Minister of Economic Warfare. But it was also Hugh Dalton’s idea to create the Special Operations Executive. Inspired by groups like Sinn Fein in Ireland, this organization was to help the French continue to fight under the German occupation as well as General Petain’s Vichy government. Independent of the War Office, the SOE was created to aid the French underground and undertake acts ranging from the dissemination of propaganda to sabotage and assassinations. It was by this organization that the fictitious Charlotte Gray was recruited, however, there were real women in the organization.

In April 1942, Winston Churchill gave approval for the SOE to send women into Europe. Women were already involved in the SOE as coders, wireless operators, and conterfeiters of identity papers but in the streets of France women spies were less conspicuous than men and could carry parcels without suspicion. Thirty-nine women were sent into France by the SOE including Vera Leigh.

Born in 1903, Vera Leigh was abandoned as a baby but adopted by an American father and English mother. After training with the Parisian milliner Caroline Reboux she went to work as a designer at the newly founded Parisian millinery Rose Valois in 1927.

When France was invaded by the German Army in 1940, Vera joined the French Resistance. She helped Allied servicemen get out of France until 1942 when she too left France. Recruited by the SOE, Vera was given the codename ‘Simone’ and flown to Tours in May 1943. She travelled to Paris where she worked as a courier but was captured while meeting another agent at a cafe in the Place des Ternes on October 30, 1943. The following May she was transported with seven other captured female SOE agents to Germany and was executed at Natzweiler on July 6, 1944.