In 1971 Bill Bowerman was tinkering with the idea of how to make track or football shoes without spikes that could be worn on blacktop or artificial turf but work equally as well on grass or gravel. His eureka moment came one Sunday morning at his home in Oregon when he sat down to a plate of waffles. After breakfast he made a cast of the waffle plates to create soles with protruding nubs that provided traction like a tread on a tire.

At the 1972 Olympic trials in Oregon, Bowerman and his business partner Phil Knight persuaded some of the marathon runners to wear samples of his waffle-soled shoes. Convinced they had a winning style, the two founded their company ‘Nike’ while they refined the waffle sole. In 1974 they launched their track shoes with the ‘swoosh’ trademark onto the market, and by 1979 Nike held a 50% share of the American sneaker market.

The original waffle iron and experimental versions of his shoes were thought to have been thrown away, but in 2010 a rubbish pit was unearthed on Bowerman’s property that contained the original Art Deco 1930s waffle iron, and some of the early shoe prototypes. The original waffle plates that Bowerman had used to cast his sole mold are still missing. However, the unearthed collection was conserved and now resides at Nike headquarters. From that first glimpse of Victorian ankle to Gernreich’s topless bathing suit, it used to be the baring of body parts that created the biggest fashion controversies. After everything had been exposed that society would allow, advertisers like Calvin Klein, who used 16 year old Brooke Shields’ sex appeal to sell jeans, and Benetton, who hired a dieing AIDS patient to push sweaters, became the most controversial aspects of fashion.  Now it’s cultural insensitivity that’s making waves.

Last summer Jeremy Scott designed a pair of sneakers for Adidas that featured ankle shackles. Considering young black American men are probably the largest market share for sneakers, you have to wonder what the hell Scott and Adidas were thinking. I have heard of a young Jewish man who had his grandmother’s concentration camp number tattooed on his arm, but it was done to honour his grandmother’s memory, not to commercially profit from the design.

This year Jeremy Scott created an artistically successful totemic-inspired sportswear line for Adidas that unexpectedly got a lot of heat from Native groups. Proprietary rights over cultural design has now hit Nike over their recent line of active sportswear that borrows inspiration from Samoan tattoos.

While it is easy to recognize that slave shackle shoes were a bad idea, it is difficult to understand why the appropriation of non-religious cultural designs are considered inappropriate – especially as fashion has been doing it for centuries. Is it really considered insensitive or racist? Like Jerry Seinfeld once quipped, can you be called a racist if you actually like the race? Can fashion be declared insensitive when it honours the designs of another culture? And who represents that indigenous culture that gets to decide yeah or nay? 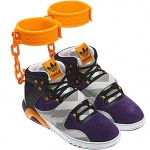 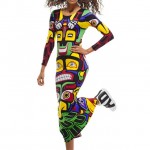 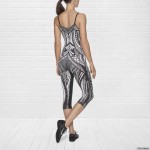