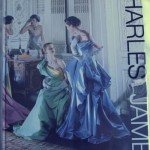 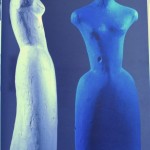 James’ mannequins for his 1954 Butterfly dress 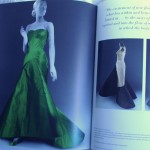 In 1988 when I was making $16,000 a year, Rizzoli came out with a series of fabulous coffee table books on the works of Poiret, Dior, Balenciaga (and I think there was one on Chanel too, but I didn’t buy it.) They were $125.00 each – $90.00 on sale if you wanted to take the chance on waiting for them to be marked down. I missed out on the Poiret and only got a copy of it a couple of years ago as a Christmas gift from Kenn who found it online from a used book seller. These were incredibly valuable books to me because I knew I probably would never handle such amazing examples in real life. I still have the books, and although the binding has become unglued on the Dior, they are still precious additions to my library.

Fortunately, the quality of these books has been revived in the most recent publication by the Metropolitan Museum of Art on Charles James. Printed to accompany their current exhibition on James, I now know I have to make it down to New York this summer to see the exhibition. My book arrived today and it is in a word – stunning. The photography is clear so you can see details of construction, there are plenty of images, intelligent, pertinent information, and bonus material in the form of an article about the conservation of the dresses as well as a thorough year by year biography of James’ career. This is a go-to, keep-forever book – the sort of thing anyone who is serious about fashion must have in their library.

I have but one complaint – why did it only cost $34.00, inclusive of tax and shipping from Amazon? Twenty-five years ago the Rizzoli books on Dior, Balenciaga and Poiret were published at more than three times the price when I could barely afford rent. This book is worth easily as much as those books and I haven’t even finished reading it yet! Colin and Livia Firth on the red carpet

When I go into thrift stores I can see how the racks of jeans in their multi-hues of blue can be inspiring for upcycling but I have to wonder if anyone will find love for the flourescent white wedding dresses, the bi-product of divorce that collect on the racks. There is a growing trend to upcycle ugly baby vintage into wearables, and eco-couture versions can be clever. The designer Gary Harvey has received some great press for his upcycled creations made from items ranging from old jeans to copies of the Financial Times.

I am sure everyone has heard more than enough about the 2011 Oscar best and worst dressed lists… however, the dress worn by Mrs. Firth is getting a lot of kudos from the Eco-press because it was remade by Harvey from eleven old dresses!

Unfortunately, Mrs. Firth commissioned Harvey to create the dress from 1930s garments, in honour of her husband’s role in the King’s Speech, which takes place primarily during the 1930s. Harvey reportedly bought eleven 1930s evening gowns from the store 360 Degree Vintage (that they called their “best” gowns) and proceded to cut the dresses into strips to make one evening gown for Mrs. Firth. The resulting frock was a pitiful end for eleven dresses that had thus far survived seventy years (and it wasn’t very well made either.)

I don’t think up-cycling should include the destruction of fine quality and desirable vintage garments. Marisa Tomei had the good sense to not have her Charles James dress refitted for her figure, which would have destroyed the value of the dress. It is a shame Mrs. Firth did not option to wear one original vintage dress or choose a modern gown designed in the style of the 1930s; or commission a dress to be made from damaged dresses, giving life to garments that would be otherwise destined for the garbage.

(March 3: Gary Harvey has now issued a statement that says the dresses were damaged. However, this crucial bit of information was absent from all coverage before a backlash from the vintage clothing community gained steam over the last couple of days. It should have been made clear from the beginning that damaged dresses were used, otherwise the story is about destroying eleven garments to create one, resulting in ten dresses worth of scraps and that is ego-couture, not eco-couture.)