Advertisment for Hermes gloves, 1950 and the real things… This goes to prove that just because something is designer doesn’t necessarily make it good – these gloves tend to make the wearer look like she has hairy arms! It’s not a perfect match because the embroidery is hand made and each purse would be unique, but this is obviously the same kind of purse. There hasn’t been an ‘As Seen In’ blog for a while (check out the tag ‘As Seen In’ for more period adverts matched up with examples.) Rubber and cotton summer shoes with platform midsoles were popular from the mid 1940s to the early 1950s.  Not only does this pair of Ball Band sandals have a 1949 advertisement with Lucille Ball, but they also have their original shoebox as well (not shown.) Jellies (molded rubber shoes) were popular once again this past summer – this time with high heels rather than the usual flat sole styles. The first time they were hits was the mid 1980s as this advertisment from the March 1985 US Vogue proves. The pair in green offered in the advert by Grendha, the Brazilian manufacturer, is identical to the red pair marked Thierry Mugler. 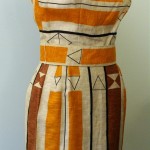 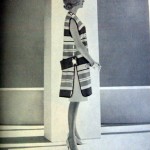 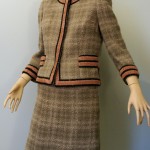 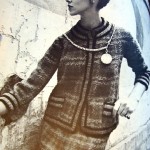 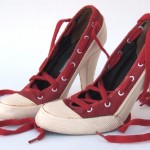 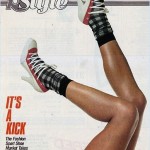 While screen shopping today I found a dress on Couture Allure that was by Richard Tam. I knew the name sounded familiar and then I noticed an advert for Richard Tam in the listing and it was my dress! There is nothing better than finding a period illustration of a garment in the collection! Richard Tam was only in business for seven years. His first couture collection for Spring 1965 was shown only months after the 24 year old designer graduated from Stanford University. He worked out of San Francisco counting that city’s social set as his client base, as well as celebrities like Ethel Kennedy, Dinah Shore, Dina Merrill, and Polly Bergen; he also sold his designs through stores like Bergdorf Goodman and Sara Fredericks. Tam closed up in 1972 and moved to Greece for several years before returning to San Francisco where he worked as an interior designer until his death in 1990.

It’s a wonderful dress and coat set. The woman who owned the version in the collection referred to it as her ‘cigarette paper’ dress (because it reminded her of the silver or gold foil paper that lines a pack of cigarettes) but the dress is actually made of an appliqued lurex and gold silk blend organza ribbon. Click the tag ‘As Seen In’ for more garments with their original images.

Added March 1/17: Got an instagram with this message – “Richard Tam was my cousin once removed and the model in that photo is my grandmother (his aunt)!”