I was alerted to a really interesting post yesterday about Teddy girls. These were the female equivalent of Teddy boys – a working class subculture movement styled on Edwardian men’s clothes and early American rock music.

In december 1954, freelance photographer Ken Russell (the same Ken Russell who became a film director) documented the Teddy gangs of East London including the now mostly forgotten Teddy girls. The archives of his photographs were rediscovered in 2005, two of which are seen here. The Teddy Boy fashion was originally designed by Saville row tailors for their elite clientele in fall 1948. The style was a reaction to the postwar demob suit every man in the UK wore. The ‘demob’ was a government-issued business suit for demobilized soldiers that looked virtually identical to suits from 1939 when war began. The fabric use was spare and the styling was middle class and middle aged.

The Teddy suit was conspicuously different, influenced by the zoot suit, with a long jacket and waistcoat. It was styled after a combination of an Edwardian gentleman’s suit with a touch of American riverboat gambler. However, the elite stopped wearing the Saville row style as working class kids from Notting Hill and North Kensington began wearing it, spawning a movement that became known as Teddy Boys.

Girls borrowed the look, combining high necked blouses or sweaters, with masculine styled jackets and coats and sandals or flat soled shoes. Some even went to Portabello road in search of second-hand Edwardian suits and coats with velvet collars. For more information on the Teddy boy movement and look, check out the website Edwardianteddyboy.

In May 1954 Toronto became the first Canadian city to have a subway. To advertise the grand opening, Simpson’s department store did a series of windows showing what the well dressed rider would be wearing in the subway. 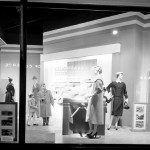 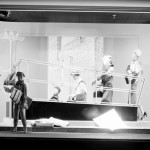 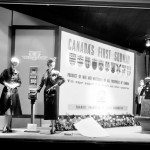