When we were in Chicago a couple of weeks ago we caught a great exhibition at the Chicago History Museum. The exhibition focussed on American fashion in the 1930s and 1940s, especially styles influenced by Hollywood, although there was a good cross section of French couture, high-end Chicago labelled garments, as well as humble frocks made from patterns at home.

Curated by Columbia College professor of fashion design Virginia Heaven, the show consisted of about thirty garments, as well as shoes and accessories. As Chicago was also a centre of the department store catalogue fashion world, there is also emphasis placed on the clothes available during that time from companies like Sears Roebuck and Montgomery Ward. It’s a great show and will be on until January 2020.

There were some amazing textiles created in the late 1920s and very early 1930s in Soviet Russia, particularly between about 1927 and 1930. I have been collecting a file as I come across samples online: 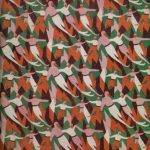 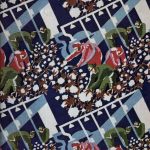 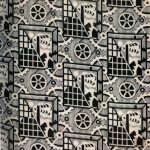 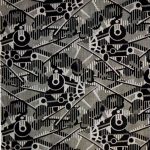 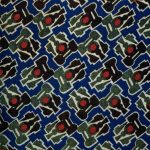 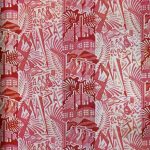 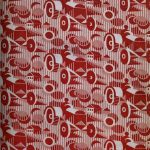 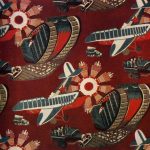 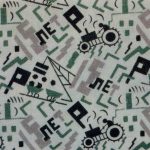 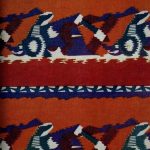 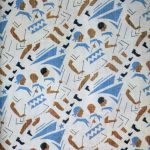 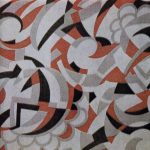 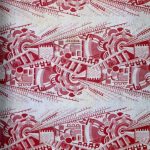 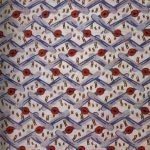 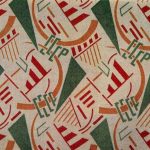 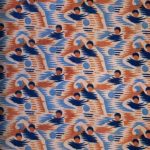 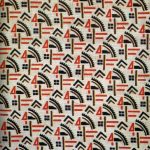 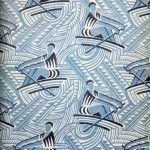 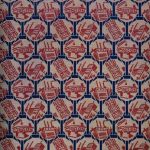 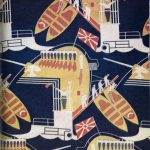 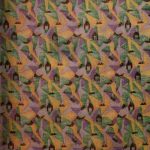 I was alerted to an interesting article in the most recent issue of Atlantic Monthly entitled Why We Look the Way We Do Now. The author, Deborah Cohen, links today’s obsession with lean figures as well as many of today’s clothes (bras, slacks…) with the 1930s. Although her connection to men’s dress is a bit more tenuous – I would trace the current slim suit look showing up on 150 pound Hollywood leading men and models to the Arrow Shirt man ideal of the 1910s. Regardless, the article is an excellent read! Shortly after Germany’s new Nazi government held a boycott of Jewish businesses on April 1, 1933 (primarily to test the public and international reaction to state-sanctioned discrimination), Georg Riegel, a clothier in the Konfektion (ready-to-wear) industry, invited colleagues to establish an association of German clothing manufacturers. Within a year, the organization was registered as the Working Association of German-Aryan Manufacturers of the Clothing Industry, known by its German language acronym ‘ADEFA’. The approximate 200 founding member firms began placing ADEFA labels in their clothing to identify their association. This was part of the campaign to encourage the purchase of Aryan-made products and purge the German clothing industry of Jewish ownership, workmanship, or influence.

ADEFA publicized in 1937 that Jewish firms were still clothing 14 million Germans, so to speed the process of aryanizing the garment industry an additional organization was founded by many of the same members in January 1938. The Working Association of German Firms of the Weaving, Clothing, and Leather Trades, or ADEBE, was founded to further the cause in the textile and leather industries, as well as the retail and wholesale trades. The Ministry for the Economy temporarily banned this new organization on the grounds it would interfere with the economy, especially as German clothing exports were dropping, but Nazi ideology overrode economic interests and the ban was lifted.

By 1938, ADEFA had more than 600 member firms and was actively funding the buy out of existing Jewish businesses. Beginning 1 April 1938, members of ADEFA were forbidden any business dealings with Jews, as defined by the Nuremberg race laws of 1935, and were required to display signs in their shop windows that stated, ‘Ware aus arischer Hand’ (made by Aryan hands). This statement also appeared on the labels which were now required in every garment made by an ADEFA member.

After the ‘Ordinance on the Exclusion of Jews from German Economic Life,’ on November 12, all Jews were compelled to sell their enterprises. Magda Goebbels, wife of the minister of propaganda and well known fashionista, realized her favourite Jewish couturiers would have to close and was heard to say “Elegance will now disappear from Berlin along with the Jews.” On August 15, 1939, the director of ADEFA announced that the goal of aryanizing the German garment industry was complete and declared that the organization of ADEFA was now dissolved. I would love to know the back story on this photo! It was taken in front of the Simpsons department store in Toronto in 1937. I am assuming the two women in the short shorts are chorus girls on a quick break from their work in a theatre across the street (there were several opposite Simpsons in the 1930s, although most had been converted to cinemas by the late 1930s.) Otherwise, I can not think who would wear these outfits on the street in 1937 without worry of being arrested. The next time any hem that short appeared on the street in Toronto was thirty years later! Ever since I discovered Merchant Ivory productions in the 1980s I have been a fan of Jennifer Beavan’s costuming work. Originally she worked with John Bright on films like The Bostonians, Maurice, and A Room With a View (for which she shared an Oscar and a Bafta award with Bright.)

Like many costumers who specialize in historical films, Beavan relies upon Cosprop – an English firm that rents ready-made and original historical costumes for film and theatre. This is often the only resource used for fitting out extras and sometimes, when there are tight schedules and small budgets, even the principal actors. Whether creating original garments or styling existing ones, Beavan has an innate ability to capture a specific feeling of an era that lends an air of authenticity to her work. My favourite work by Beavan is Gosford Park – a small production with minimal costume changes, but she managed to capture the personalities of the characters in the clothes they wore. Specifically, one dress was supposed to capture middle class taste (a green dress that had to look fashionable but inexpensive) and the end result was bang on. Remains of the Day, Sense and Sensibility, and The Gathering Storm round out what I think are her best work. Sherlock Holmes, Tea with Mussolini, and Alexander are my least favourite (Sherlock Holmes couldn’t decide if it was a steampunk version of history or not, Tea with Mussolini had all the old ladies dressed in fashions twenty years out of date rather than matronly clothes contemporary with the storyline, and Alexander… well, the costuming was the least problem for that debacle of a film.) The King’s Speech is a wonderful film and Beavan once again captures the right feeling of that period. In this  interview with Jenny Beavan she explains how the film was a challenge because of the lack of time and money. My favourite adage is: You can get something fast, cheap or good – pick two. If a filmaker is forcing the costumer to work fast and cheap then they should be grateful they have a costumer like Jennifer Beavan who can do fantastic work.

Other than a quick scene near the beginning of The King’s Speech that is set in 1934 but where the Duchess is dressed in a 1920s dress (probably the result of an editing change) there are only a few minor costuming flaws that are typical of a film done too quickly and on the cheap. There was one hat in particular that did not sit well over Helena Bonham Carter’s wig, and a pale blue outfit the Duchess wears to Balmoral in 1936 looks inappropriate for the year and season – it resembles something made for the royal tour of Canada in 1939, however, in all fairness I would have to see the film again as I was so mesmerized by the story that I wasn’t always paying full attention to the clothing!

I suspect Jennifer Beavan will receive an Academy award nomination for this film, and she will be a leading contender for the award. I give The King’s Speech an 8.5 out of 10 for costuming authenticity and I look forward to seeing it again. Two models dressed in outfits made half of cloth and half of cellophane to reveal their jockey underwear, 1935

I ran across this picture from an old newspaper, so excuse the poor quality of the image. It is a promotional shot from 1935 for jockey underwear!

Jockey originated as Coopers Inc., a hosiery firm established in 1876. They expanded to making cotton knit undergarments in 1900.

Suffering from the effects of the Great Depression in the early 1930s, the company expanded its product line in the hope of finding a new customer base and in January 1935 sold its first pair of men’s briefs at Marshall Field’s in Chicago. Briefs were cut short on the leg and had a Y-shaped fly panel. The company called the style Jockey, since it offered a degree of support, not unilke a jockstrap. 30,000 pairs were sold within the first three months of their introduction and the company soon changed their own name to the same as their best selling product – Jockey!

History lesson aside – I think the outfits are a great idea for a Halloween costume! Released at the Toronto International Film Festival two years ago, Me and Orson Welles (the grammatically awkward title is from the book the film was based) has finally made it to DVD. Set between November 5 and 11, 1937, the story is about the creation of Orson Welles’ production of Julius Caeser, which revolutionized Shakespeare’s play by setting it in contemporary fascist Italy. Woven amongst this storyline is the fictional account of a teenager hired for the part of Lucius.

‘Faction’ films can be problematic (some day I will write about why I am not a fan of James Cameron’s Titanic), however, Me and Orson Welles avoids most of the problems of mixing fact and fiction. Many reviewers did not like Zac Efron in the film and I think perhaps the reason is because he stood out from the rest of the actors by appearing the least authentic. I found his presence distracting because he didn’t look like a teenager from 1937. Had his hair been cut in a more period style it would have helped to make him look more like an actor and less like a movie star. From a costume perspective, it was nice to see a period film using costumes of everyday attire. The people on the streets are dressed seasonally and accurately for New York in November 1937. It is hard to believe that most of the filming was done in the UK, although the architecture doesn’t always perfectly subsititute for New York, there are no clues in the costuming that the film was not made in the U.S. Nic Ede (the costumer) said in an interview that he focussed on making the clothes have an ‘American’ look, including using sportswear which was just beginning to take off in the U.S. in the late 1930s. There are scenes of women in trousers, plaid 3/4 length jackets, and Zac’s character often wears sneakers.

This is a great film to watch for everyday fashions of 1937, the men’s hairstyles were not always that convincing and perhaps a bit more of a socio-economic mix of people on the streets of New York would have been nice, but overall the film gets a solid 8/10 for costuming.