Me in a tan corduroy suit for the junior prom, spring 1978, and no, I don’t have the suit anymore.

Although not true post and beam construction, the expansive glazing (on the south face), flat roof, natural materials, decks and semi-open floorplan, were in keeping with the tradition of west coast modernism. The house was below the street level and was five sided to fit the oddly shaped lot through which a creek ran across diagonally. There was a fantastic view of towering century old cedar and fir trees, wild blackberry bushes and foxgloves. Unlike our North Vancouver home, that was furnished in Danish modern, by 1975 we had inherited my grandmother’s eclectic mix of antique furniture. Some of the antiques looked great in the West Van house but there were too many styles and it made for a cluttery look that didn’t suit the modern interior.

Some owner since we sold the house in 1983 has done a major renovation, transforming it into more of a California Contemporary than a West Coast Modern. 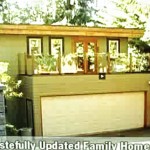 Believe it or not, this is the same view of the house as was taken in 1975 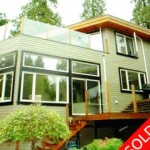 South side with a lot of vinyl and fenestration… 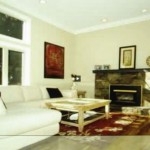 Living room with a smaller fireplace and coving…

While I like the addition of the hardwood floors (we had wall to wall brown carpet), I am a bit shocked that the good architectural elements have been obliterated. The mansard roof is gone – the cedar shakes and fir plank siding displaced by vinyl shiplap. The plate glass windows are now double pane thermals in pre-made frames, and every room has had coving added to the ceiling – a very traditional style for what was intended to be a modern interior. As well, the original natural wood front door has been replaced with what looks like a painted metal panel door. The only elements I recognize from our time at the house is the  bridge my father built over the creek, and the original stone facing of the fireplace (although the mantle has been truncated and it looks like they lowered the height of the fireplace, reusing the same facing stones.)

As for a good clothing story related to this house… I do have a couple of dresses worn by my disco-dancing sister Sue (but no pictures of her wearing the dresses I have), and a Welsh tapestry suit my mother got for Christmas 1977 that there is a photograph of her looking at on Christmas morning, but I can’t find it at the moment. Although my tan corduroy suit is long gone, I did keep my slubbed grey silk YSL grad suit for twenty years before donating it to the Society for the Museum of Costume in Vancouver about 15 years ago. I should have kept it, but this was before the FHM was founded and I was downsizing at the time and sold off or donated my men’s collection to other institutions – a collection I have been rebuilding ever since.

6 thoughts on “On Another Street Where I lived…”