In 1956 I. Miller launched a shoe that was engineered to take interchangeable heels. The idea was to extend the wearability of one pair of shoes from day into evening, or for increasing the potential for one pair of shoes to accessorize more than one outfit.

On July 31, 1956 I.Miller & Sons in New York filed for patents 2795866 (designed by French shoe designer Andre Perugia) and 2795867 (designed by New York shoe manufacturer Merwin Zuckerman) for different ways to attach interchangeable heels. The patents were granted for both ideas on June 18 of the following year. Perugia’s idea was to slide the heel onto a track and secure from underneath the sole. Zuckerman’s idea was to use a pin to attach the heel from inside the shoe. Both ideas seemed good on paper but the reality is that changing heels on a pair of shoes requires too much futzing. The FHM has an example using the Perugia version and the heels are only slightly easier to change than the tire on a car. 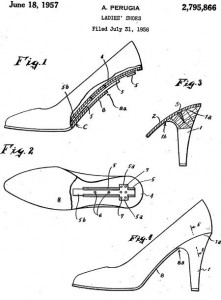 Perugia method of adding a heel, 1956 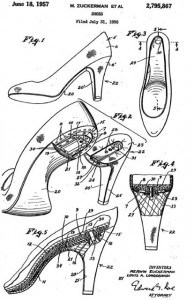 Not surprisingly, the style didn’t catch on, but every so often the idea is revived by another shoe designer. I have seen two other versions from the 1980s and 1990s, and once again, the idea is being revived, this time by Tanya Heath, with the cardinal error of also trying to offer interchangeable heels of different heights. Shoes are made on a last with a sculpted sole to fit a specific heel height and can not be interchanged for a lower heel without throwing off the balance of the shoe design, and the wearer.

If you want to read more about interchangeable heels, my Italian shoe-friends at The Historialist have found lots of information on the topic.