Who’s that girl with my grandfather?

I recently inherited a photo album that had belonged to my mother’s father after he moved to Vancouver B.C. in 1911, well before he met and married my grandmother in 1927. My grandfather looked nothing like me – he was short, had a wirey, lean build, sharp features, grey-blue eyes and a receding hairline by the age of 20. I never met him, he died  several years before I was born, but I have been told by relatives who did know him that he was athletic, had a keen wit, could hold his liquor, sing like an Irishman, and  ‘ladies found him very charming…’

I remember seeing this album when I was a kid and asking my mother who the lady was with all the clothes. Nobody knew for sure but the family legend was that she was a member of the Spencer family of Spencer’s Department Store  (the high-end department store in Vancouver from 1907 until 1948 – I’ll blog about that store in a few days.)

I thought I would post some of the pictures of this mystery fashionista on the slight chance somebody might recognize her or the buildings in the background. None of the images have any identifying marks or writing and none of the buildings have addresses. What I do know is that judging by the fashions, he must have known the mystery woman from about 1912 – 1915. 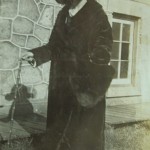 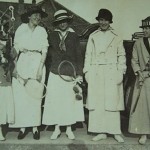 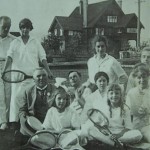 My grandfather and mystery woman on far left 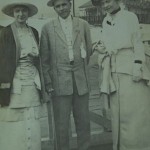 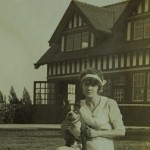 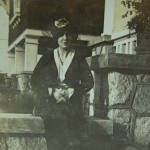 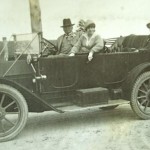 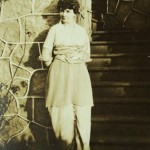 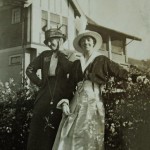 Jonathan Walford is a fashion historian and co-founder of the Fashion History Museum in Cambridge, Ontario. The FHM maintains a collection of nearly 12,000 artifacts dating from the mid 17th century to the present. Jonathan has authored various books and museum catalogues, including The Seductive Shoe, Shoes A-Z, Forties Fashion, 1950s American Fashion, and Sixties Fashion.
View all posts by Jonathan →
This entry was posted in Canadian dress and tagged 1912, 1913, 1914, kerrisdale, Shaughnessy, Spencer's Department store, vancouver. Bookmark the permalink.

1 Response to Who’s that girl with my grandfather?