Samuel James Williams was born March 13, 1853 in Madison, Indiana. In 1874 he went to New York and became a travelling salesman. He married Sarah Freeman in 1880, and continued working as a salesman until October 1881. He then moved to Toronto to establish his own company that made shirts, collars, and cuffs. In 1886 he moved the plant to Berlin, Ontario, and incorporated the business with two partners under the name of Williams, Greene & Rome with himself as president and general manager.

Twenty years later, in 1906, the company boasted it had 500 employees including fourteen travelling salesmen who sold their products across the country. The company also boasted their employees worked only 50 hours per week, with a 1 ½ day weekend (this was cutting edge for the time.) 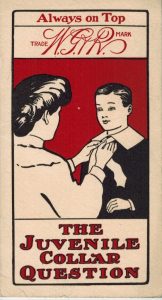 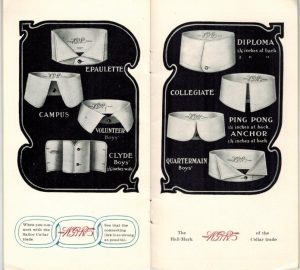 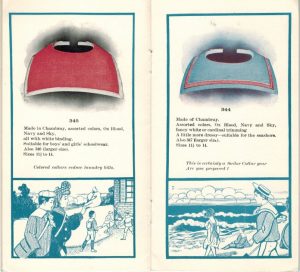 In 1913 a new factory was constructed, but in 1920 Williams retired (he died in 1923) and the company was sold to Cluett, Peabody and Co., makers of Arrow brand collars and shirts, where they remained for 80 years. In 2011, the former factory was converted into loft condos. Jonathan Walford is a fashion historian and co-founder of the Fashion History Museum in Cambridge, Ontario. The FHM maintains a collection of nearly 12,000 artifacts dating from the mid 17th century to the present. Jonathan has authored various books and museum catalogues, including The Seductive Shoe, Shoes A-Z, Forties Fashion, 1950s American Fashion, and Sixties Fashion.
View all posts by Jonathan →
This entry was posted in Canadian dress, Men's fashion and tagged arrow. Bookmark the permalink.