When everything was Tango…

On September 15, the Fashion History Museum will be hosting a Tango Tea. A popular entertainment that developed during the years leading up to World War 1, and survived until the end of prohibition. The soiree allowed men and women to take afternoon tea in reputable palm-filled hotel courts where they could view and learn the latest dances.

The tango was a sensuous dance that originated in the brothels of Buenos Aires in the late 19th century. Sanitized of its overt salaciousness, professional dancers like Irene and Vernon Castle demonstrated the tango (as well as other novelty dances, often named after animals like the turkey trot, bunny-hug, and foxtrot) at Tango Teas. Although not everyone approved:

“Unspeakable Jazz Must Go! …We reprove those dances which are lascivious, such as the Fox-trot, the Tango, the Turkey-trot, and others of the same kind, by whatever name they may be called . . . Rapid and jerky music is condemned and with any form of improper dancing is disapproved of as degrading tendency.” Ladies Home Journal, December, 1921

Despite some pious disapproval, the tango became popular, and was not just the namesake for an afternoon dance, but also a style of footwear. Tango boots and shoes, brought attention to the ankles that were often extended during the dance, showcasing the colourful, footwear and highlighting legs with criss-crossed ribbons or lattice-cutwork. 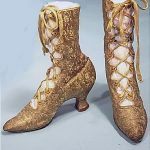 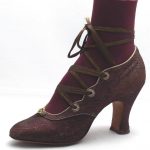 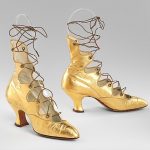 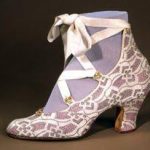 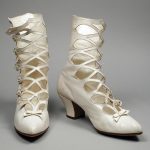 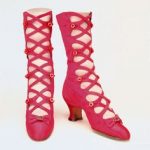 Jonathan Walford is a fashion historian and co-founder of the Fashion History Museum in Cambridge, Ontario. The FHM maintains a collection of nearly 12,000 artifacts dating from the mid 17th century to the present. Jonathan has authored various books and museum catalogues, including The Seductive Shoe, Shoes A-Z, Forties Fashion, 1950s American Fashion, and Sixties Fashion.
View all posts by Jonathan →
This entry was posted in Shoes. Bookmark the permalink.