China Chic, New York, 2016 Two dresses with example of original work that inspired their pattern. I learn just as much (or even more) from this straight-forward exhibition as I do a window dressed multiple-mannequin presentation.

I am not one to criticize French taste – I usually hold it in the highest regard. However, the current Dior exhibition in Paris is making me think that maybe they don’t always get it right.

A trend has been building in the museum field for twenty years now, led primarily by the Met in New York, for making fashion exhibitions into installations that look more like Bergdorf Goodman windows — but too much window dressing can make forests out of trees. Perhaps I am more of a purist – I am happy with a good clean presentation of salient artifacts so I can appreciate every item and understand its placement in the exhibition and interpretation in the text. Sometimes multiples are a great way to make a point but quantity very quickly overpowers quality when used unnecessarily, and presentation overpowers content when the settings and props overpower the artifacts.

Would any other art form be subject to this kind of window dressing? Would paintings by Picasso be shown suspended from the ceiling like a flock of geese? Would old masters be reframed in bubblegum pink plastic frames? in the mid 1990s, the Art Gallery of Ontario created a Victorian picture gallery to show how paintings used to be presented, from floor to ceiling – it was a great way to show their, frankly, second-rate art because the presentation was more interesting than the art itself. 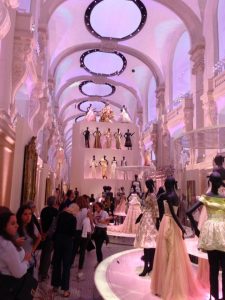 Dior exhibition, Paris 2017, LOTS of dresses, round and stacked stages, cases, architecture, light show… there is a lot going on 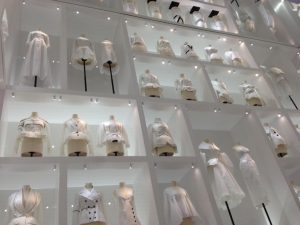 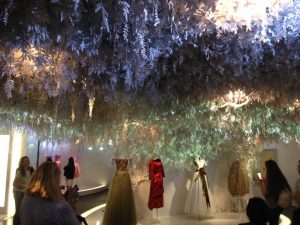 Dior exhibition, Paris 2017, claustrophobic ceiling treatment is impressive, but does it enhance or compete with the couture? 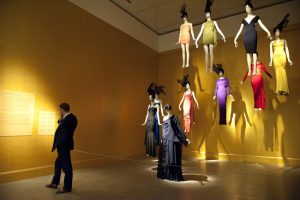 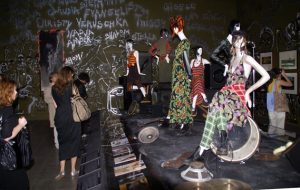 The Model as Muse, New York 2009 – Graffiti complimentary or competing? 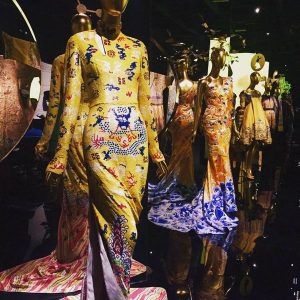 China Chic, New York 2016, Multiples make the point, but the individual gowns are sacrificed for the overall message

Jonathan Walford is a fashion historian and co-founder of the Fashion History Museum in Cambridge, Ontario. The FHM maintains a collection of nearly 12,000 artifacts dating from the mid 17th century to the present. Jonathan has authored various books and museum catalogues, including The Seductive Shoe, Shoes A-Z, Forties Fashion, 1950s American Fashion, and Sixties Fashion.
View all posts by Jonathan →
This entry was posted in Museum Exhibitions. Bookmark the permalink.