Perhaps the first preparation to commemorate the  American Civil War (1860 – 1865) centennial began with the publishing of McCall’s pattern #1759 in 1952 – identified as a “Centennial Costume”. More patterns followed throughout the 1950s and early 1960s from the ‘Big Three’ pattern publishers: McCall’s, Simplicity, Butterick. All the patterns produced were very loosely based recreations – I have yet to see one 1960s Centennial dress that has made me look twice to consider if it might be a real dress from the 1860s. The centennial patterns were created to suit modern figures with ‘lift and separate’ brassieres and uncorseted waists. The resulting dresses were also invariably run up on a machine and made from poly-cotton, rayon satin, or nylon taffeta. Virtually all American Civil War Centennial costumes were made from one of these patterns, as well as Canada’s 1967 Centennial costumes (with the addition of one pattern produced by McCall’s specifically for Canada’s Centennial that featured a late 1860s silhouette.) As celebrations geared up in Canada throughout 1967, newspapers featured front cover photographs of community elders and school children dressed in these inauthentic costume creations, often accessorized with vintage muffs or parasols, collars and hats found in attic trunks and dress-up boxes. I don’t know how many of these costumes I scornfully flipped through on racks at garage sales and thrift stores in the 1980s and 1990s, but by the time I realized I should acquire an example or two for the collection, they had all disappeared.

Fortunately, in 2013 I found two, advertised on Kijiji that had been worn on July 1, 1967 for celebrations in Alma, Ontario. The mother/daughter dresses in red gingham and mauve, were even featured on the front cover of the July 1 local paper. 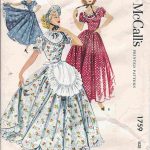 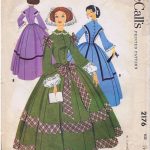 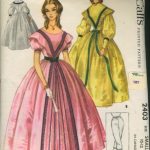 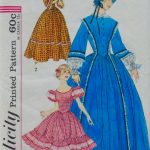 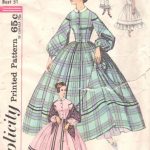 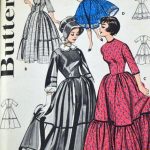 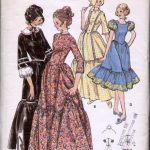 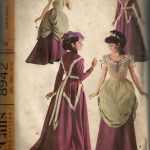