In 1879 Scientific American reported “…there is nothing more curious than electric jewellery.”

A Parisian watchmaker who enjoyed creating mechanical birds, Gustave Trouvé also invented the Lilliputian battery that could be tucked inside a pocket or hidden within an evening coiffure to power-up various forms of illuminated and mechanical jewellery. Trouvé’s bijoux electriques made their debut in 1879 at the fiftieth anniversary celebration of the Ecole Centrale des Arts et Metiers at the Hotel Continental in Paris. A journalist from La Nature that attended the event reported: “Some of the guests are wearing Trouvé’s charming electric jewels: a death’s head tie-pin; a rabbit drummer tie-pin. Suppose you are carrying one of these jewels below your chin. Whenever someone takes a look at it, you discreetly slip your hand into the pocket of your waistcoat, tip the tiny battery to horizontal and immediately the death’s head rolls its glittering eyes and grinds its teeth. The rabbit starts working like the timpanist at the opera. The key piece, a bird, was a rich, animated set of diamonds, belonging to Princess Pauline de Metternich…the princess could at will make the wings of her diamond bird flap.” 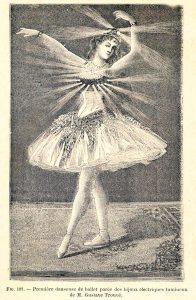 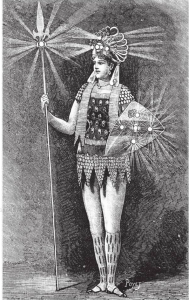 Most of Trouvé’s bijoux electriques were destroyed in 1980 when the building in which his archives was held burned to the ground. For more information about Trouvé and his electrical jewellery see this article:

Electric Jewellery and the Forgotten Genius who Lit Up Paris