An oft-told tale is that Mary Quant ‘invented’ the miniskirt – a myth she didn’t readily deny, but when pressed she admitted she did not invent it anymore than Courreges or anyone else, and I agree with her. The mini was an ‘air du temp’ development that was already around in little girl’s dresses, performance and sportswear. Many designers picked up on the knee-baring hemline for town wear around the same time in 1964 – but it was really the teenaged girls, especially in Britain who also bought a lot of Quant clothing, that hiked the hemlines up higher, exposing the inner thigh. Regardless of the facts, the myth continues, but thanks to Daniel Milford-Cottam, a friend of mine who works at the Victoria and Albert Museum, the myth can now be unravelled from the facts. I think one of the biggest culprits for the miniskirt myth is the illustration to the left that first appeared in a 1973 retrospective exhibition catalogue at the Museum of London entitled ‘Mary Quant’s London’ but has also appeared in several other fashion histories. The three dresses pictured are of popular early Mary Quant designs dating from (left to right) 1958, 1960, and 1963.  The image was supplied by Mary Quant for the exhibition catalogue, who, I have been told, also supplied some of the dresses in the 1973 exhibition – many recreated by Quant specifically for the exhibition in shorter lengths than originally designed,  emphasizing the mini myth. These dresses are now residing in the Museum of London or the Victoria and Albert Museum.

The original designs can be seen in these three images, showing their more modest, and accurate ‘just below the knee’ hemlines. The first dress shows the knees, but that’s because Mary Quant, who is wearing the dress, is sitting down: 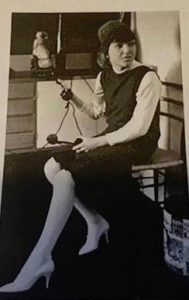 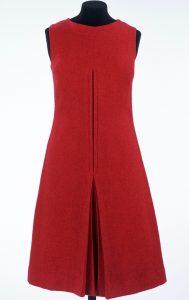 2 thoughts on “Myth Information – Quant and the Miniskirt”