Evelyn Maureen Baker passed away December 5, 2017 almost unnoticed. This seems fitting since Baker worked most of her life incognito under the label Susan Small.

Born in London on May 26, 1920, Maureen was one of six children and received her education from a convent school. She found her first job in fashion by knocking on doors of fashion businesses in the West End. She eventually got a job with Leslie Carr-Jones, owner of a modest wholesaling firm called Susan Small that specialized in petite sizes. Baker rose through the ranks quickly, becoming chief designer in 1943. The firm became a leading British label after the war with a well-known ad line “It’s a Susan Small world”. Their product was high end and carried by the best department stores. They even won the UK licensing rights for some Christian Dior lines. Baker created six collections per year but remained invisible, working behind the company’s label.

In 1968, Princess Alexandra, a long-time client of Susan Small, recommended Princess Anne go to Baker. Dressing the princess was not an easy task as other designers had made the young Princess Anne look like “lamb dressed as mutton”. Baker aimed at a style that hit halfway between royal protocol and contemporary fashion.

In 1973 Baker designed Princess Anne’s wedding dress in an antique style reminiscent of Tudor fashions of the mid 16th century. When the dress was revealed, Baker’s name became known for the first time in her career. Susan Small folded in the mid 70s and Baker then worked under her own name for HRH and a small circle of other clients that included Margaret Thatcher. Baker retired in 1992. 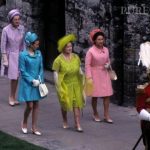 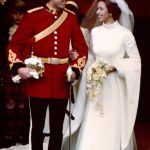 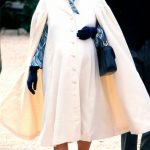 Born in Cobourg Ontario in c. 1934, Campbell trained in fashion at Ryerson Polytechnic before apprenticing with John Cavanagh in London from 1954-1956. Campbell opened his own dressmaking workshop in Bayswater Road in November 1957, but by the fall of 1960 he had moved to Kensington where he debuted his first collection of 21 couture gowns. He gave up his own couture business to become the designer/manager of John Cavanaugh’s first ready-to-wear boutique in February 1966. In 1973 Campbell opened his own demi-couture/ready-to-wear boutique in Chelsea, followed by a second shop in Knightsbridge in 1978. His boutiques carried designs off-the-rack for average sizes, but as each piece was individually made, special orders to fit figure problems could be done on demand. He supplied several dresses to Princess Diana over the years, beginning in 1981 with a print dress worn on her Honeymoon, and an outfit in the colours of the Welsh flag she wore on her first official tour of Wales as the Princess of Wales. Stewart Parvin, the Queen’s private dressmaker trained under Campbell in the early 1990s. Campbell closed both his shops when he retired in 2009. 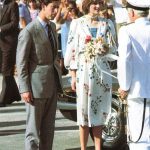 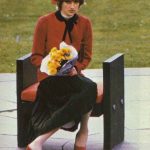 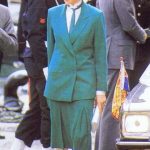 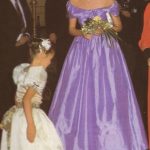 Russian born Yekaterina Bobrikova (Catherine Bobrikov) worked in the Jeanne Lanvin fashion house from 1927 to 1934. She set up her own fashion house under then name Catherine Parel at 11 Rue Boissy d’Anglas in 1936. She released two small collections per year for her clients which included well known Parisian actresses and singers at the time, including Michèle Morgan and Lys Gauty. Features of her collections included sheer backs in 1937 (see illustration at bottom right), and straw trimmings in 1938.

For more information about Catherine Parel and other Russian couturiers of the 1930s, click here. Marit Allen’s career in fashion started at the age of twenty at Queen Magazine in 1961. She created a column called ‘About 20’ that showcased young designers with young fashion ideas – perfect timing for the burgeoning Mod movement. In 1964, Allen moved to British Vogue where she launched ‘Young Idea’ pages, featuring up and coming designers like John Bates, Foale and Tuffin, and Ossie Clark. Allen remained at Vogue until 1973. Introduced to the film world through her husband, Allen dabbled with costume design until her marriage ended in 1983 and she took on film costuming as her full time occupation. Although she didn’t necessarily specialize in period films, Allen did exceptional historic costuming in films like White Mischief, The Secret Garden, Brokeback Mountain, and even Little Shop of Horrors. In 2008, she posthumously received a BAFTA award and an Oscar nomination for her costume designs for La Vie En Rose – the biopic of Edith Piaf. Allen died from an aneurysm in 2007.

The museum was recently offered a hammered brass breast plate from the 1970s with the designer’s name ‘Jules Parker’ stamped onto the pig suede lining. It was an interesting piece, but the price was too steep.

Looking for some information about Jules Parker, I could find only a few references: He was a black designer working out of a studio in Soho; photos of his feathered swimwear from the Ebony Fashion Fair appear in the September 18, 1974 edition of Jet Magazine; and it seems he passed away sometime in the 1980s.  That is about all I can find regarding Jules Parker — any further info would be gratefully received! 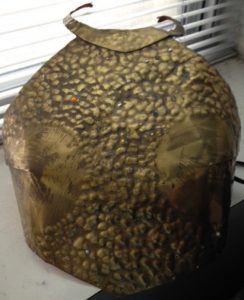 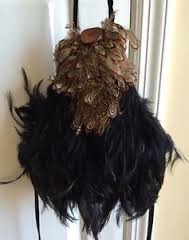 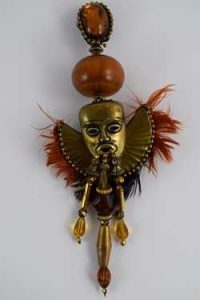 Although ‘Master John’ sounds like some kind of fetish shop, it was actually Toronto’s glam-rock boot shop in the 1970s. Stocked with styles that rivalled Vancouver’s Fox & Fluevog, London’s Terry de Havilland or Los Angeles’ Fred Slatten, John Master opened his first shop at 611 Yonge Street in c. 1971. The shoemaking was done at a small factory at 2752 Danforth Avenue near Main Street. His shop was as its height of success in 1974 – around the time he opened another shop at 513 Yonge Street. However, a declining interest in platform shoes forced him to close his first shop by the end of 1975, and the the second shop in 1979. His boots were not the best quality in terms of construction, but they never lacked pizazz. Silver leather platforms trimmed with snakeskin were common features of his showiest thigh-high pieces. Master claimed to have sold 300 pairs of handmade shoes a week to his clients which included: Black Sabbath, KISS, and British actor Christopher Lee.

Added November 5, 2019: At the time I wrote this, little was known about this elusive bootmaker, but since then a lot more information has surfaced. I wrote another blog about him here.

Thanks to Terry Charter for sending some more pics (below) of Master John boots. Although Master John never labelled his boots, Terry has picked up some examples with known provenance from the original owners: Chuck Howard, was one of those designers of the postwar era that gave American fashions a distinctly American look. Born in Cochrane, Georgia in 1927, Howard was stationed in Hawaii as a tail gunner in World War II. Courtesy of the G.I. Bill, Howard studied dress design in Paris after the war and then settled in New York. He first worked as a photographer’s model before working as a sketcher for New York designers including: David Crystal, Bill Blass, Anne Klein, and Richard Cole. After becoming the designer for Townley in the mid 1960s he began designing under his own name as well as creating a pattern line for Vogue until 1974 when he closed his own company and returned to Anne Klein to design their Studio Line.

In the late 1970s, he left the fashion world to open a restaurant in the theatre district with his partner Edward Vaughan. When they closed the restaurant in the early 1980s they moved to Saba in the Dutch Antilles. Howard died in 2002. Born June 28, 1905 Zelda Barbour Wynn Valdes grew up in Chambersburg, Pennsylvania and learned how to design and sew at her uncle’s tailoring shop in White Plains, New York.

In 1948 she opened her own boutique called ‘Chez Zelda’ at Broadway and West 158th street in New York where she made clothes for stars including: Dorothy Dandridge, Eartha Kitt, Ella Fitzgerald, and Jessye Norman. By the late 1950s she had moved her shop to midtown at 57th street. She is given credit by some as the designer of the original Playboy bunny costume, but this is disputed by some fashion/pplayboy historians. It may have been that she made the costumes, but didn’t design them. The Sassy Jane Manufacturing Company was incorporated on March 22, 1917 by Missouri-born June Rand – a seamstress who had moved to California. She started the company in Los Angeles making gingham aprons, and with that endeavour becoming successful she moved into making brightly coloured gingham dresses.

The company expanded from 200 employees in 1917 to over 600 by 1920 when Sassy Jane added lady’s pyjamas to their product line. However, the postwar economic recession combined with a tax audit that determined the company had short-changed the IRS by more than $10,000 in 1918 and 1919, resulted in the company selling to new owners by 1923, and going out of business entirely in 1926.

Information from Syd Chaplin: A Biography, by Lisa K. Stein

Le Hibou (The Owl) was Ottawa’s first coffee house, founded in 1960 by Denis Faulkner, a student from the University of Ottawa who wanted a place where young Ottawans could meet, listen to music, play chess, and drink coffee. The club became a popular night time meeting place – Denis even met his future wife Penny Knight at the club. One summer, the newlyweds took a trip to Mexico, Guatemala, and El Salvador in a Volkswagen van. They bought hand-woven shawls and cloth from a seller who would become their supplier, sending shipments to Canada on a regular basis. Upon returning to Ottawa, Penny started her ‘Chac Mool’ boutique, selling her finds out of Le Hibou on Saturday afternoons.  At first only the shawls and cloths were sold, but then Penny started to make dresses from the material. On later trips to New York to visit her brother, Penny also bought textile remnants for her designs.

After Le Hibou moved to a larger location on Sussex Drive in the late winter of 1965, Penny found a small space for a boutique on the Sparks Street Mall, around the corner from Elgin Street. She acquired an old potbelly stove, which she painted bright pink, and called her shop the Potbelly Boutique. Potbelly became the first boutique in Ottawa geared for the younger generation, and Le Hibou served as a location for numerous fashion shows. For one of the shows a film was shown concurrently that included a shot of a model dressed in a Potbelly original, barbequing a hot dog over the Centennial Flame. They got the shot before a Mountie could rush over to admonish and banish them from the Parliament building’s lawn. On another occasion a new type of light show that originated in San Francisco was used. It consisted of cooking oil and water-based food colouring in a glass baking dish that when tilted and turned on an overhead projector created a psychedelic show of colourful swirling globules. “The combination of large, loosely crocheted dresses on braless models, Mondrian style dresses, and the vibrant colours combined with the light show so impressed an Ottawa television producer that he did a half hour show, touting it as an “avant garde” fashion show for Ottawa.” recalled Denis Faulkner on his blog Recollections.

Denis Faulkner sold Le Hibou in 1968, and the coffee house closed in May 1975, but Potbelly boutique remained in business until at least 1978. Ottawa articles credit Penny’s boutique with styles ranging from Medieval inspired silk velvet evening dresses to terry-velour pant suits. I can find no articles about Potbelly Boutique or Penny Faulkner dating after November 1977.