If you grew up in Vancouver in the 1960s and 1970s like I did, you knew this tune – the $1.49 Day jingle. I blogged about Woodward’s, the Vancouver department store that was in business from 1892 to 1992 a while back, but I didn’t mention their famous advertising jingle.

The tune was written by Australian-born Tony Antonias on February 17, 1958 while he was the creative director of the Vancouver radio station CKNW. He had just returned to work after a Christmas holiday in Australia to find a new typewriter on his desk, and an unwelcome assignment on his work plan. He was to write a creative advertisement for Woodward’s. When he hit his computer in frustration, the machine made a couple of ‘dings’ that started the tune in his head.

The ‘$1.49 day’ ad was used to promote a number of specials that always made Woodward’s the place to be on any given Tuesday (I recall stockings, underpants and bath towels were commonly promoted on Tuesdays.) Three years after the jingle was first aired in April 1958, Tony received an award from the Hollywood Advertising Club in California for creating one of the world’s best radio advertisements. Like it or not, it sticks with you! Peter Weller (1868-1940) lived in Berlin in the 1920s an 1930s where he worked as a fashion and portrait photographer. His work appeared in leading German magazines including: “Die Dame”, “Das Magazin”, and “UHU”. His studio and most of his archives were destroyed during the war.

Founded in 1950, Casual Corner was an American retail clothing chain that operated stores under the brand names of Casual Corner, Petite Sophisticate and August Max Woman. The women’s sportswear store, founded by Charles Carples and Stanley Vogel in West Hartford, Connecticut, grew into a chain of 20 locations when it was sold to United States Shoe Corporation in 1970 (U.S. Shoe was diversifying outside of the footwear industry at the time.) By April, 1971, the chain had grown to 25 stores, and doubled to over 50 within two years – aimed at the junior and young woman’s market. By 1995, when U.S. Shoe was bought out by Luxottica, Casual Corner was just shy of its peak of 525 national stores offering clothes for the working woman’s wardrobe. Expensive mall rents, cheaper, off-shore manufacturing, and online shopping forced the chain into liquidation in 2005.

The following images are from an undated Casual Corner catalogue, c. 1973 (I originally guessed 1974, but Fuzzylizzie at the Vintage Traveller posted about the same catalogue a couple of months ago, and convinced me I might have been off by a year) 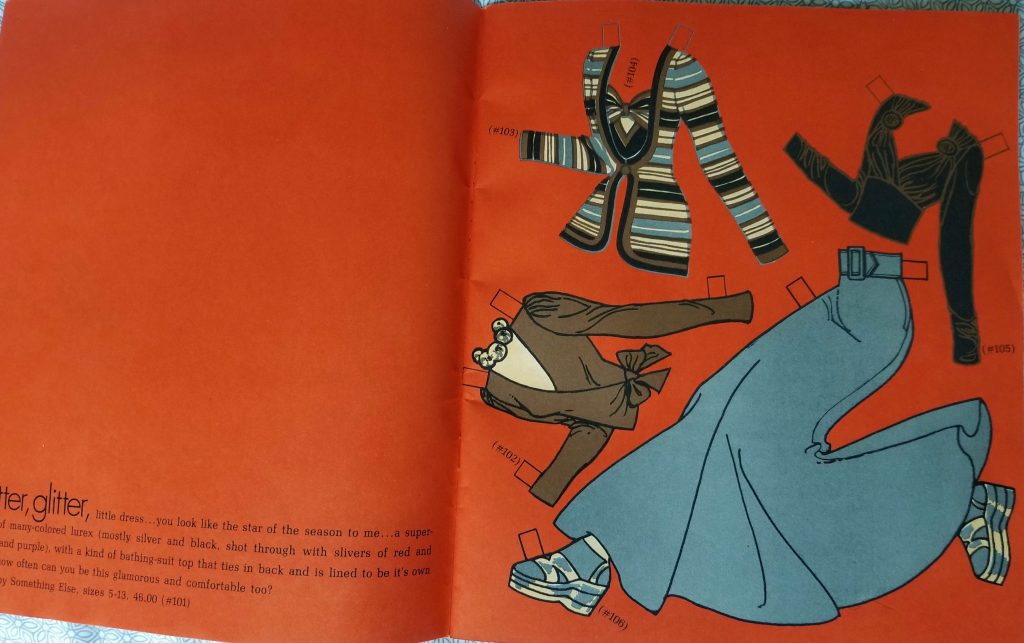 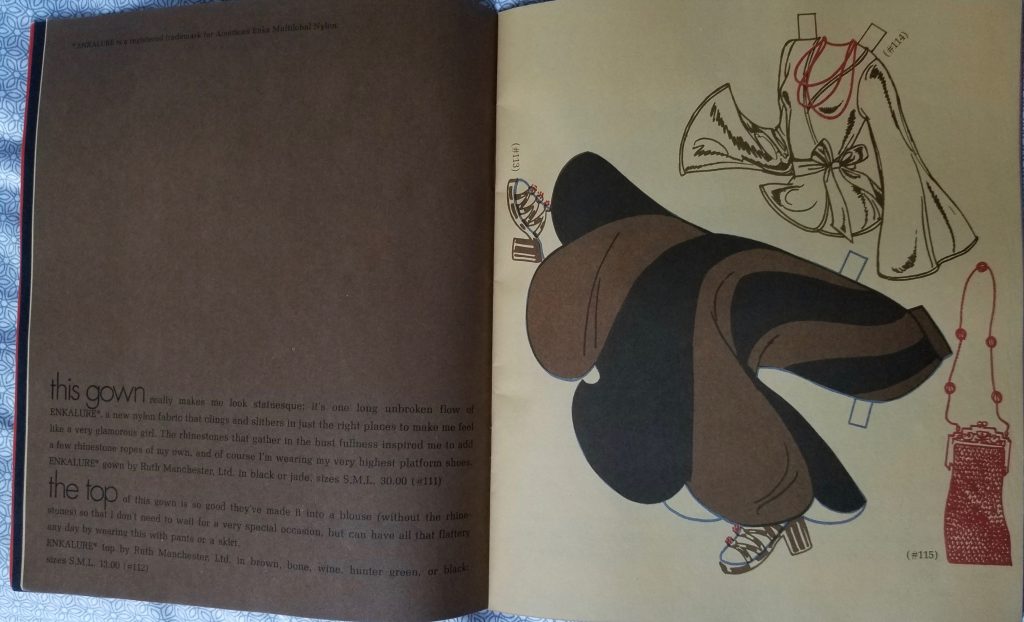 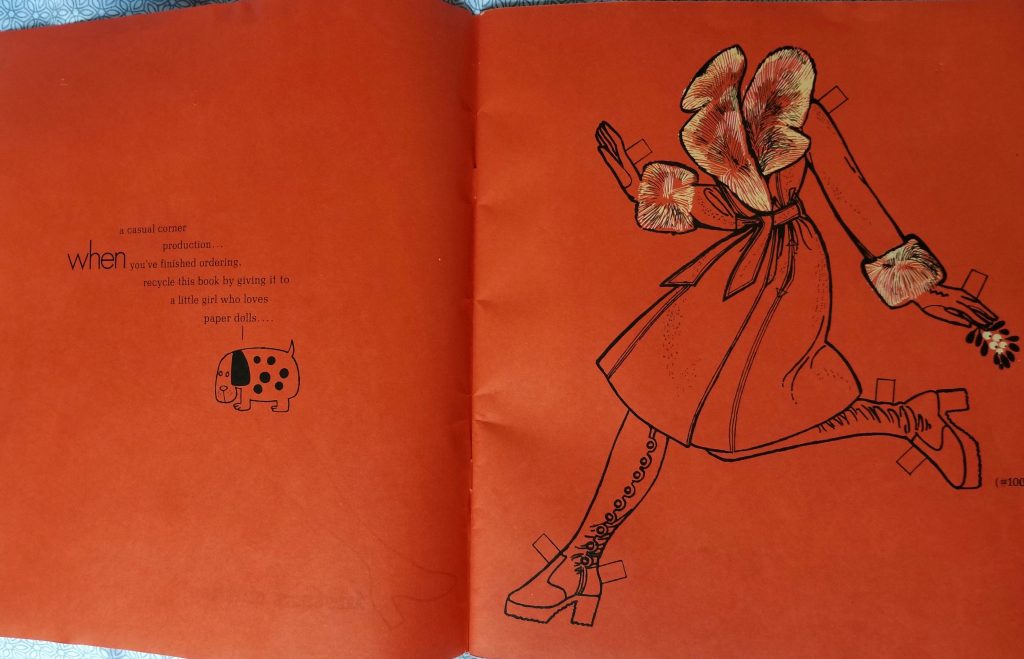 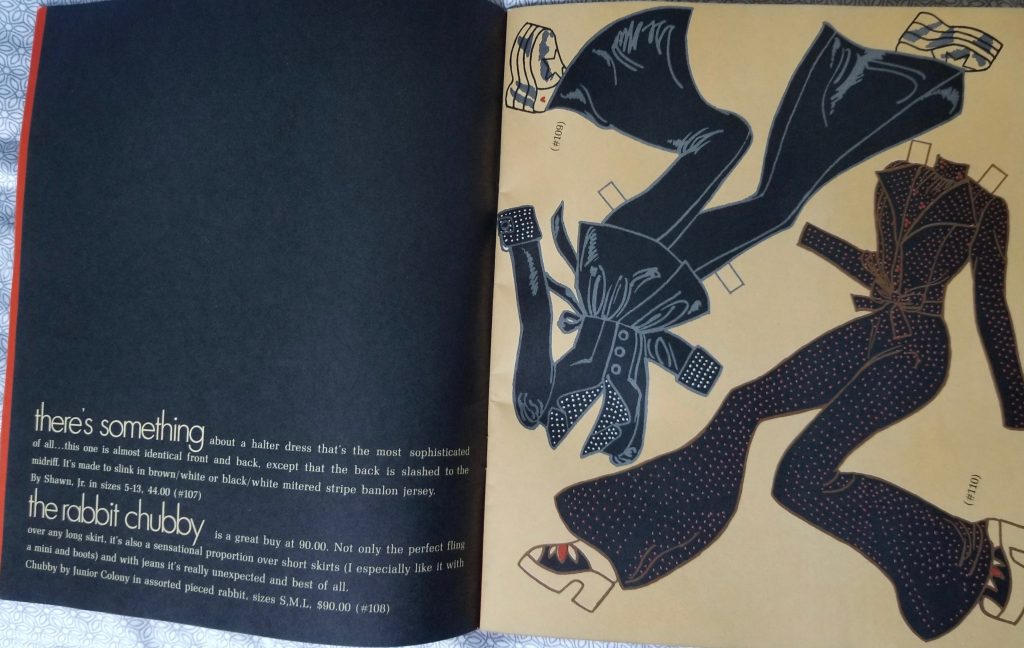 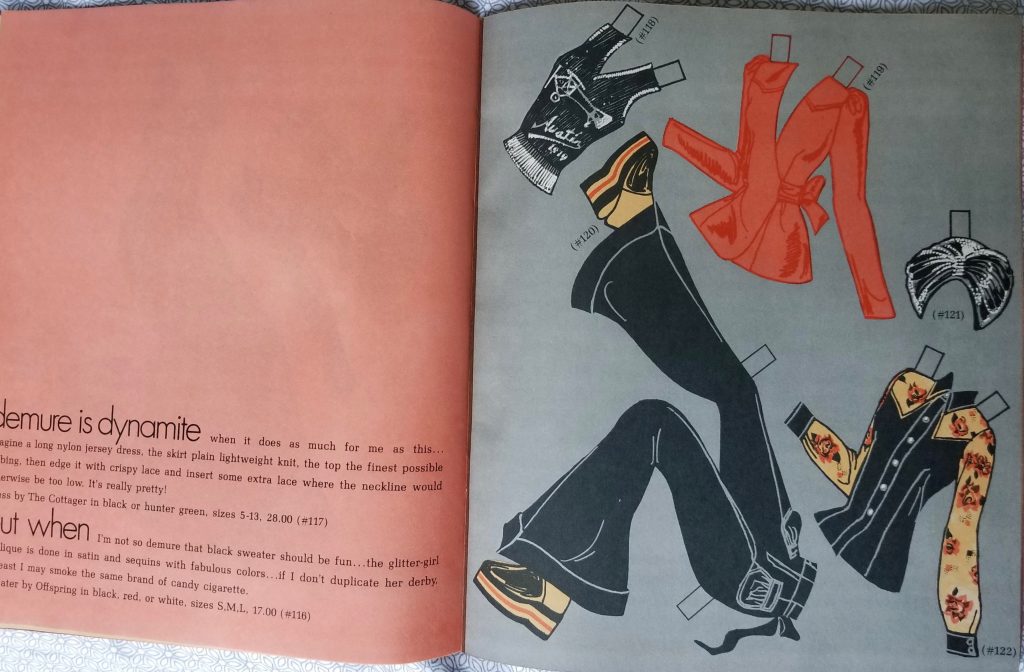 Bullock’s was founded in 1907 in downtown Los Angeles by John G. Bullock. In 1929 an Art Deco branch on Wilshire Boulevard was opened that became known as Bullocks Wilshire. Bullock’s acquired I. Magnin, a high end San Francisco department store in 1944, and twenty years later, both were acquired by Federated Department Stores. The stores operated autonomously until 1988 when Macy’s bought the Bullock’s/I. Magnin business from Federated.

Although the Art Deco Bullocks Wilshire was listed in the National Register of Historic Places in 1978 the decline of Bullocks Wilshire had already begun as other luxury stores and boutiques moved to the west side of the city, leaving Bullocks Wilshire alone. Bullock’s was dismantled in 1989 and the Wilshire store converted to an I. Magnin in 1990. Two years later, the main floor of the store suffered severe damage during the Los Angles riots. The store was closed in 1993 and stripped of its Art Deco fixtures and fittings that were used in other Macy’s stores. Bowing to heritage preservationist pressure, most of the contents were later returned. In 1994 the building was sold to the Southwest Law School, which restored the structure, and adapted it for its own use. For more images of the store’s interior, see this article from Messy Nessy.

I have known Vancouver collector Claus Jahnke for 35 years now – from right around the time he first started collecting German and Austrian clothing. I can proudly say I have had a leading role in finding many of his best pieces and now Claus is loaning some of his rarest treasures for an exhibition at the Jewish Museum in Vienna called “Buy From Jews! Story of a Viennese store culture”.

The media release that outlines the purpose of the exhibition sums up the theme with some interesting information: …The emergence of department stores in Vienna was a part of a pan-European development of the 19th century. Today, the fact that many of the founders came from Jewish families is just as little known as the former existence of the garment district in Vienna’s first district. Prominent houses such as Gerngross, Zwieback, Neumann, Jacob Rothberger, Braun & Co., Goldman & Salatsch, Jungmann & Neffe and Knize characterized Vienna’s fashionable shopping miles on Kärntner Strasse and Mariahilfer Strasse. But the exhibition also brings the so-called suburban department stores Dichter and Wodicka back into the city’s memory. With their businesses, these families made an essential contribution to Viennese urban development and influenced the economic, topographic, social and cultural cityscape to the present day.

Through the caesura of the Shoah (holocaust), this shop culture shaped by Viennese Jewish women and men disappeared almost completely. The success stories of exiles can be traced abroad— such as that of the costume designer and graphic artist Ernst Deutsch-Dryden or the architect, urban planner and inventor of the shopping mall, Victor Gruen. Many companies, however, could no longer build upon the successes of the time before 1938. In any case, most of them decided not to return to Vienna after 1945. In Vienna’s urban and commercial landscape only the names of some successor companies and, in rare cases, parts of the building stock recall the major department stores, as well as the numerous retail stores operated by Jewish women and men.

Contrasted to this “vanishing” is the development of the garment district after 1945. Attributable to migration and immigration, individual stories of enterprises like Schöps, the Tuchhaus Silesia, Wachtel & Co., Haritex, Zalcotex and many others, which also bear witness to the rebuilding of the Vienna Jewish community after 1945, let themselves be told here…

“Buy From Jews! Story of a Viennese store culture” opened May 17 and will run to November 19, 2017 at the Jewish Museum Vienna, Dorotheergasse 11, 1010 Vienna. The museum is open daily but for Saturdays from 10 a.m. to 6 p.m. For more information: http://www.jmw.at/en/exhibitions/buy-jews-story-viennese-store-culture

Fascinating footage from 1956 of Southdale Minnesota’s Richfield Edina Shopping Mall. They claim to be the first enclosed mall in the world. One of the best resources for Canadian fashion business history is the publication Style – not the online millennial fashion site, or the British fash mag, but the fashion trade publication that was in production for over a century.

It’s origins and ends are a bit of a mystery: There are references to it originating in 1888 but the earliest publication in existence (which is identified as issue #1) dates from January 1891 when it was known as the Canadian Dry Goods Review. This was one of the first trade journals published by J.B. McLean Publishing.

By the 1930s the monthly magazine was being called Stylewear Review and was officially renamed as Style in 1946. In an effort to keep the New York publication Women’s Wear Daily from publishing in Canada, the format was changed to a biweekly (fortnightly) tabloid, and coverage was expanded to include fashion trade news from correspondents in Paris, London, and New York.

The publication went monthly with glossy magazine covers in the 1970s, however, the Canadian fashion industry grew substantially in the late 1970s and the monthly format couldn’t keep up with timely news, so a biweekly tabloid format was revived in 1981.

Soon after celebrating its centennial in 1988, the publication went into decline. In July 2001, McLean Publishing sold off its shares to Rod Morris, who resold it to Rive Gauche Media in 2008, headed by Olivier Felicio. From there the trail goes cold. The publication is no longer in production, but there is an online based (Style.ca) magazine. When I asked if they had any association with the former publication they answered “We have no information on this”…

Not really a store window but rather a tableau from the Parisian waxworks Musée Grévin of fashions, decorations, and furniture from an undated spring… I am guessing it’s probably 1921. The museum thought the clothes were by Poiret, and one of them might be, but the central figure looks more likely to be by Lanvin to me. In preparation for our exhibition next year in honour of Canada’s Sesquicentennial, I am researching some of the more obscure Canadian labels in the collection and am starting with what may be the oldest. From the waistband of a black satin afternoon dress from the mid 1880s is a gold and black woven tape label reading: D. Gardner & Co., The Argyle House, Ottawa. This business appears to have begun as a dry goods store founded by misters Gardner, Russell and Leggatt sometime in the early 1870s. A snippet from a 1950s newspaper recollecting the early days of Ottawa refers to Mr. David Gardner travelling to Paris on a buying trip while the city was under siege (c. 1870 – 1871). By 1881 the store had relocated at 66 & 68 Sparks Street – an Italianate commercial building built in the late 1870s. According to one source, the building was called The Argyle (sic) House in honour of the Marquis de Lorne (Duke of Argyll), Canada’s 4th Governor General (1878 – 1883).

An advertisement for the business in 1881 announced a sale of cheap millinery, as well as silks, hosiery, gloves, and parasols – to make room for fall importations (‘cheap’ does not refer to inferior quality in this period, but rather to ready-made items). By 1884 the company was known as Russell, Gardner & Co. but by 1889 the company was identified in the Ottawa city directory as D Gardner & Co. A search through that directory resulted in a staff list that included: a manager, bookkeeper, cashier, porter, 12 dressmakers, 2 mantle makers, 4 milliners, 5 salesmen and 6 saleswomen. As a well established dry goods and dressmaking firm in the most fashionable shopping street of the country’s capital, business must have been good. However, the Montreal ladie’s tailor of J.J. Milloy was recommended by Lady Stanley, wife of Lord Stanley, Canada’s 6th Governor General (1888 – 1893), saying that Ottawa had no dressmaker of sufficiently high calibre for her. Her words may have been the cause of the demise of D. Gardner & Co.

“…best place at the present time for the ladies of Ottawa… to visit is the balance of the bankrupt stock of D. Gardner & Co… all fancy woollens less than half price, shawls (clouds and hoods from 10 cents each)… whole line dolman ulsters and jackets to one quarter of their original selling price…”

By 1892, 66 & 68 Sparks Street was occupied by John Murphy, a dry goods dealer that would relocate to a new building in 1909 as a partner in Murphy-Gamble, Ottawa’s most successful and chic department store that would remain in business until 1971. A modern bank building, built in 1981, now occupies the site where Argyle House once stood.