Scarborough-raised Monica Schnarre won the Ford “Supermodel of the World” contest at the age of 14, in 1986. Schnarre immediately began working 300 days a year “There were weeks that I was on a plane every night” she recalls in a recent interview.

Her adventures in modelling took her from Russia in 1987 where she and Christy Turlington were launching a fashion magazine and being followed by the KGB, to Berlin in 1989 where she was one of the last people to go through Checkpoint Charlie on the last day it existed.

In the 1990s, her modelling career led to some acting work, including playing a supermodel on the soap The Bold and the Beautiful.

Schnarre turned 50 this past May. When asked for some beauty tips, she said she rinses her mouth with diluted hydrogen peroxide once in a while to keep her teeth white, and to control her weight she makes sure she is hungry between meals and never eats after 7 p.m.

Often mis-identified as a store window mannequin head or dating much older than they are, the Lamoureaux mannequin head was produced, with no change in design, from about the late 1930s to the mid 1960s. Made in a small factory in New York by Gloria and Leon Lamoureaux, the heads had real human hair, set in place with shellac insider the head. Purchased by beauty-school students to practice hairstyles, the heads went through “shampooing, curling, waving, combing, brushing, permanent waving, blocking and drying.” By the time the student had graduated, most of the hair was dried and fried on these poor old heads. The originals were made of latex, which hardens and cracks with age, causing paint to flake from the surface. By the late 1960s cutting and teasing was more important than setting and waving, and plastic rubber heads became more useful for teaching hairstylists than these Lamoureaux versions.

I just read an interesting article about beauty marks or patches (called ‘flies’ in French). This is a rough English translation of that article by Corinne Thépaut-Cabasset, international relations historian and project manager at the Cultural Development Department of the Palace of Versailles and president of the ICOM Costume international committee. The full article appears in issue #34 of the journal Château de Versailles (July-Sept. 2019):

Intended to camouflage a facial defect or to accentuate, by contrast, the whiteness of the skin, “flies” were part of the arsenal of seduction in the Great Century, (note: The Great Century refers to the period in France under the reigns of Louis XIV to Louis XVI, c. 1660 – 1790)

At all costs and for all kinds of people, there are ways: “to soften the eyes, to trim the face, to put on the forehead, to place on the breast and, provided that a skillful hand know how to put them to good use, you never put them in vain.” A 1661 poem spoke of the ‘good fly maker’ – The fly was compared to the bee and the face of a woman to a flower on which, like bees, the fly lands. The ‘good fly maker’ makes a point of making the lady irresistible, and the man is bitten.

Flies varied in size or shape and had specific names. “Those cut in length are called assassins”, explained Furetière in his Dictionary of the French language (1690)… Placed near the eye, it is the “passionate”; at the corner of the mouth, the “kisser”; on the lip, the “coquette”; on the nose, the “cheeky”; on the forehead, the “Majestic”; in the middle of the cheek, the “gallant”; in the fold of the cheek when one laughs is called “the playful”; there are also the “discreet”, the “virtuous”, etc.

Their dimensions vary. Long ones are called “ball flies” or “court flies”, because their large size could be seen from a distance and had a better effect in a room lit by candles. Small and “wonderfully flirtatious” flies were worn during the day for parties and were called “alley flies”.

The best flies were cut with sharp dies from a very black taffeta that was well gummed, so that it did not fray and get caught in wrinkles…

I find it hard to believe it took 12 hours to set this hair – its just an upsweep, probably with a hairpiece slapped on top… 30 minutes tops.

These production tests from the film Falbalas are interesting because the film was shot in Paris in early spring 1944, before it was liberated. The film revolves around the couture fashion industry, and shows the sharp contrast between Paris couture and its extravagant use of fabric and the real world of fabric rationing. I think the hair is also interesting for its use of permanents!

There are several songs about tattooed women, but one of the best is by Groucho Marx.

Lydia the Tattooed Lady, was written in 1939 by Yip Harburg and Harold Arlen, and was famously performed by Groucho Marx in the 1939 film At the Circus. 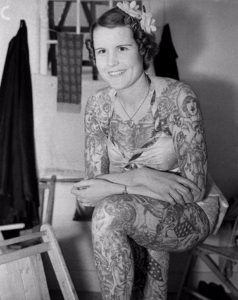 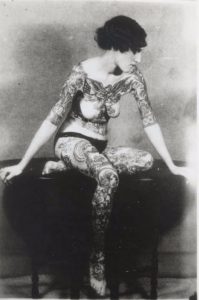 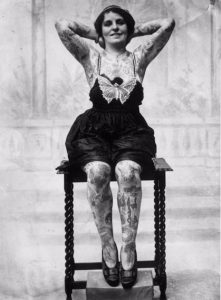 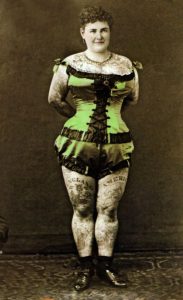 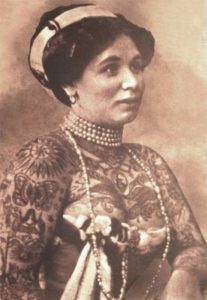 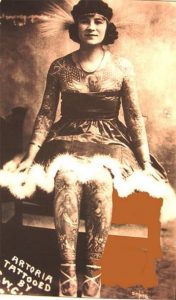 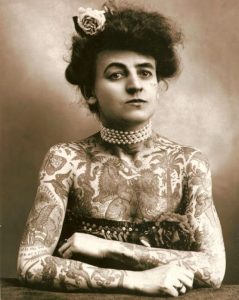 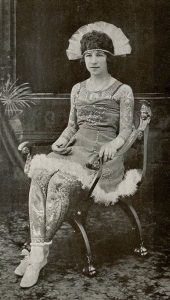 Here’s a great link to images of women getting tattoos, and here is another great tattooed Lady song is by Paddy Roberts: Canadian model, artist, and tattoo world-record-holder Rick Genest, aka Zombie Boy’, has died from suicide. Quebec-born Genest came to fame in 2011 when he appeared for the first time as a model for Thierry Mugler menswear, shortly afterwards, Lady Gaga asked him to appear in the video for her song Born This Way.

Genest, whose body was covered 90% by tattoos, became famous for his extreme tattooing, and held the world record for the most number of insect, and bone tattoos.

Recorded by Louis Jordan and the Tympany Five on August 15, 1950, Chartreuse was released early the next year.

You’re a freckled gal
You’re a pug-nosed cutey, sweet as Charlotte Russe
You’ve got big blue eyes
So I ask you why have you dyed your hair chartreuse?

‘America’s Sweetheart’ – the Canadian born actress, Mary Pickford  (born Gladys Smith in Toronto, Ontario in 1892) was also one of Hollywood’s film pioneers, along with fellow Canadians Mack Sennett, Louis B. Mayer, Jack Warner, Marie Dressler, and others. In 1917, around the height of her success, Pickford was given the title of Pompeian Beauty of the Year by the Pompeian Manufacturing Company, and posed for their night cream in a magazine advertisement, also making her Canada’s first international model.

In 1938, after her career had faded, she developed Mary Pickford Cosmetics, a range of make-up products designed to be affordable to the masses. However, the product line  doesn’t seem to have lasted long, disappearing after a couple of years. 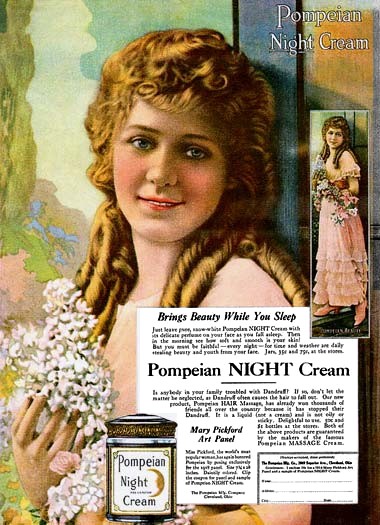 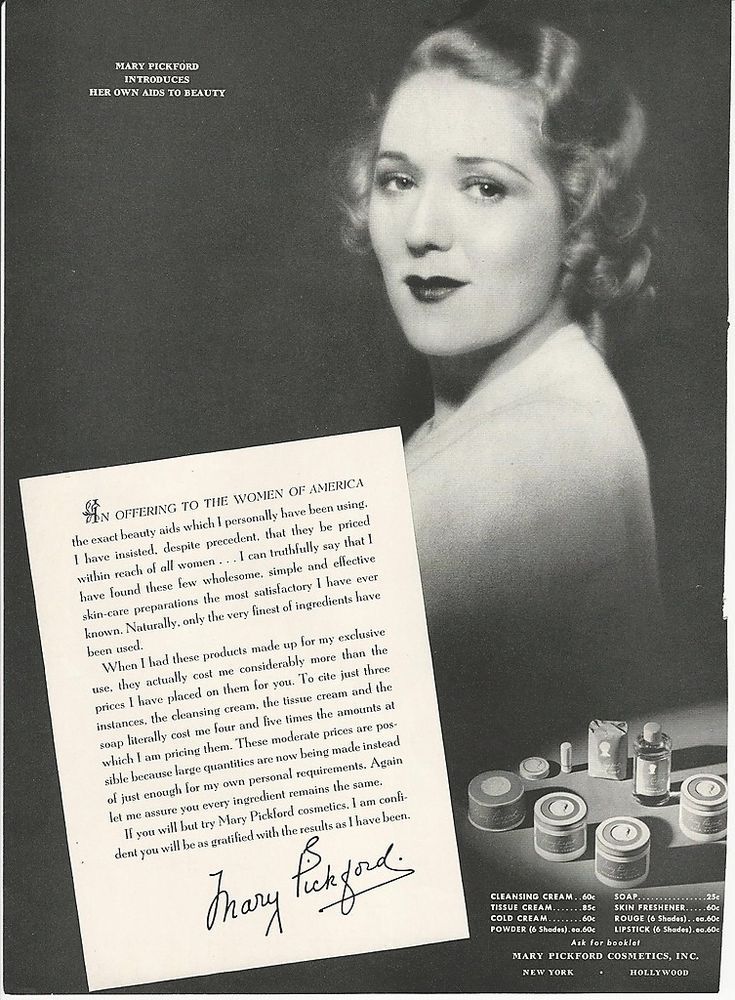