Cleaning up some pic files and came across these shots of sportswear from spring 1992:

In a few minutes this past Tuesday, Brooklyn sneaker company MSCHF (pronounced Mischief) sold two dozen shoes for U.S. $1,425 each. The customized Nike Air Max 97 sneakers called ‘Jesus Shoes’ were blessed with religious symbols: Holy water from the River Jordan were injected in the sneaker bubbles, the Vatican-red insoles were scented with frankincense, and a steel crucifix dangled from the shoelaces.

The shoes were made as a parody of the absurdity of collaborative products, although the irony may have been lost on its buyers as many of the shoes have already been resold for more than double their original cost.

22 year old Brit Isaiah Hanson-Frost, is about to have his 55 pairs of designer sneakers, valued at about $30,000 Canadian, sold by the police. Last April, Hanson-Frost was sentenced to six years in jail after admitting to firing a gun at a car in November, 2017 during a gang feud over drugs.

“We are keen to put a stop to anyone who is living a lavish lifestyle which has been funded through crime” said Detective Inspector Dave Shore-Nye of the Gloucestershire police.

Items seized after a criminal trial are often sold, especially if money raised from the sale can be used to help victims of those crimes. Proceeds from the sale of Hanson-Frost’s sneaker auction will go to the High Sheriff’s Fund, which encourages activities that divert minors from a life of crime.

A fashion show of ladies beach and lounge wear at the Hudson Bay store in Vancouver, British Columbia in 1932. Note that the runway is made up of desks! When tennis really was a fashionable, social game…

This year the big tennis fashion todo is over Serena Williams’ black catsuit at the French Open. I think she made a mistake by suggesting it was for health reasons since there are plenty of options for loose clothing and compression tights that would have been within tournament rules that were also suitable attire for avoiding blood clots.

Serena and her sister Venus have a history of shocking attire on the courts, wearing outfits of non-traditional colours and patterns. The controversy over the catsuit shouldn’t have come as a surprise since there was already precedence set by Wimbledon when it banned catsuits in 1985 after Anne White wore one, even though it was white, in compliance with Wimbledon’s all-white clothing rule. However, next to shorts and a polo top, Williams’ catsuit was a practical choice and, in black, looked far better on Serena than the long-johns look of the white catsuit worn by Anne White.

With catsuits now banned, Serena opted yesterday to wear a tutu instead… 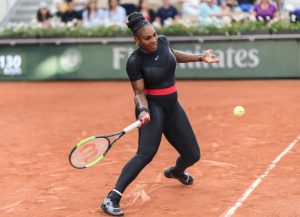 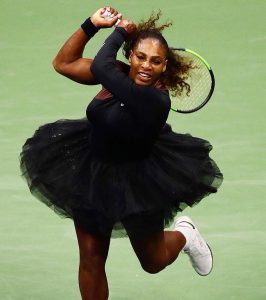 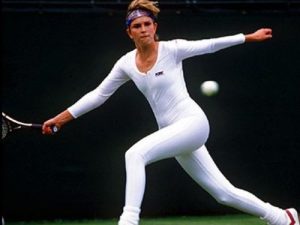 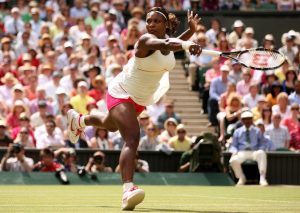 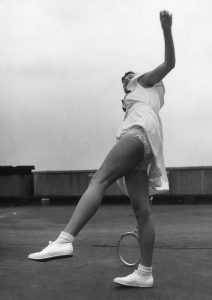 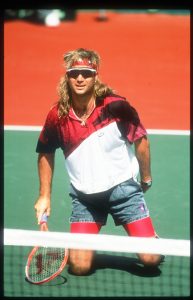 Messy Nessy had an interesting photo essay about the history of tennis fashions:

From Corsets to Culottes: The Women who Dared to Change Wimbledon The raccoon coat originally grew in popularity in the 1920s, alongside college football. Late fall games were not comfortable for fans sitting in open stadiums, and raccoon coats (a more affordable choice than expensive farm-bred mink or fox) became a fashionable way to stay warm. The popularity for the coats peaked just before the stock market crash of 1929, and as they fell from favour during the early 1930s, supplies surpassed demand. The bulk of the unsold coats went into storage where they languished until the Davy Crocket coonskin cap craze of 1955 resulted in many of the old coats being repurposed. In 1957, New York socialite Sue Salzman was telling a story at a Greenwich Village party about how she had hesitated on buying an old raccoon coat, but that it had sold by the time she had decided she wanted it.  A guest who had heard the story told her that if she wanted a raccoon coat, he could put her in touch with relatives who had a warehouse of jazz-age raccoon coats. Sue promptly went into business acquiring and reselling the coats to retailers like Saks Fifth Avenue and Lord & Taylor. Some were sold as is, some recut and relined. However, like thirty years before, their popularity faded after a few years.

More to the Story… The Women’s Tennis Association founding as recreated in c. 1972 in the film

We saw Battle of the Sexes last night – the film about Bobby Riggs and Billie Jean King’s 1973 tennis match – an event I remember well the first time around. The film is very entertaining and remains pretty true to the facts, although some liberties are taken with the timeline (Everything is set in 1972-73 rather than the actual September 1970 – September 1973 time frame.)

The costuming by Mary Zophres is good. I have always contended that recreating recent pasts for films is actually harder than distant periods because your audience will know what’s wrong. I remember 1973 well, and Zophres captured the feeling in all its pastel poly pant suit glory. There are a few pieces here and there I didn’t love on extras but you have to look hard. The Women’s Tennis Association founding in 1970

One of the characters in the film, played by Alan Cummings, is Ted Tinling. He was an interesting character with a lot of influence in the world of tennis fashion. When Tinling was a teenager he spent winters in the French Riviera playing tennis. He learned to become an umpire for tennis matches, and as his status grew, doors opened for him at Wimbledon. Tinling became a tennis historian, consultant, chief of protocol, and also tennis dress fashion designer for the International Tennis Federation. He was responsible for breaking the rules about all-white tennis dresses.

Tinling passed away in 1990 at the age of 80. It was only after his death that it was learned, rather surprisingly, that the 6’7″ effete Tinling, who was known for his extremely fashionable clothes, had also served as a British Intelligence spy during the World War II.