This is an excellent example of a wearable art collection that presents itself as a provocative fashion idea, but is not intended to be taken as a serious fashion direction. These collections get far more attention than they warrant, mostly due to social media. This collection, which pretends to be a serious suggestion for transgender chic, isn’t made well and doesn’t present any new ideas not already seen in the Rocky Horror Picture Show over 40 years ago. Few designers can make successful ‘shock chic’ collections. The few who can make it work have superior design skills and technical prowess (McQueen, Herpen, Viktor & Rolf…) 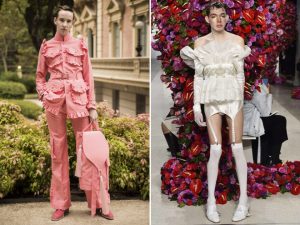 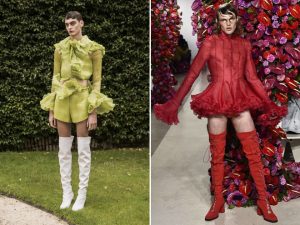 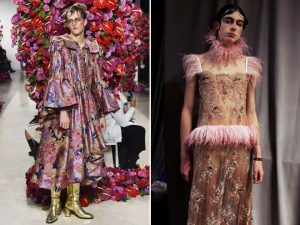 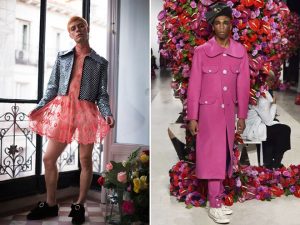 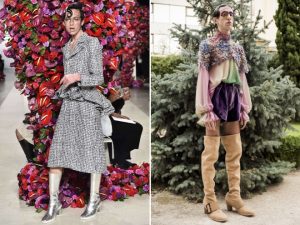 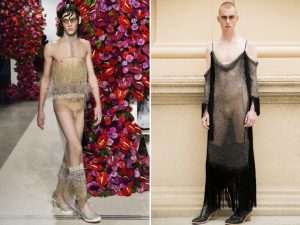 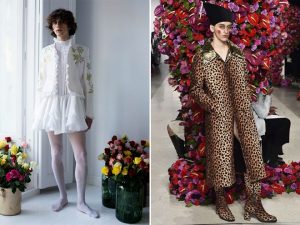 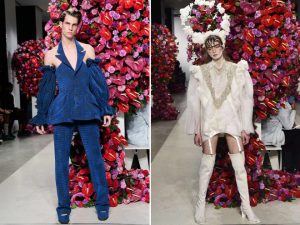 A recent article on Messy Nessy brought up a little known piece of sexist uniform history – beefcake carhops. According to Paula Bosse of Flashback Dallas in the late 1930s “Women were dressing in scanty outfits, hula skirts, midriff-baring costumes, to serve drive-in customers,” and so the owner of one of those restaurants in Dallas had the idea of appealing to female customers by putting men in scanty serving uniforms too. The hunky male server trend was short-lived though, in part because of the onset of WWII with young men enlisting to serve their country rather than hamburgers. I snagged this photo off of messynessychic.com  (not very original of me to so blatantly lift someone else’s blog material, but the photo was too good!) Evelyn “Jackie” Bross (left) and Catherine Barscz (right) at the Racine Avenue Police Station in Chicago, June 5, 1943. They had been arrested for violating a cross-dressing ordinance. 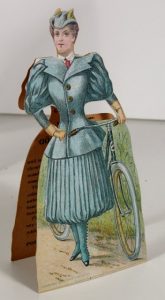 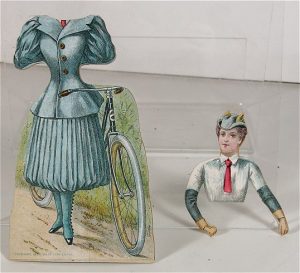 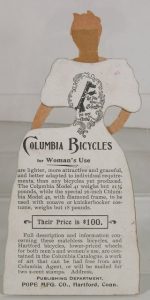 Before unisex styling in the late 1960s, there was a dalience with His & Hers fashions that began in the 1940s and lasted into the 1960s, usually in the form of holiday sportswear – Hawaiian shirts and dresses, and bathing suits. 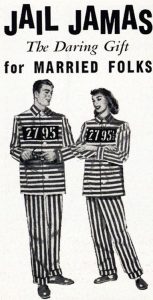 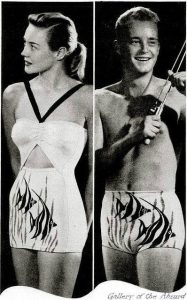 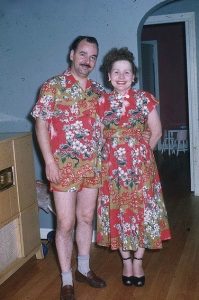 This may have seemed like a good idea but then one day little Billy changes into his gym strip at school… and thirty years later he goes into therapy to learn how to not hate his mother. This past summer we visited the Corning Glass Museum (well worth the visit), where Kenn took a photo of an 1851 painting in their collection depicting the earliest known view of Corning, before the glassworks were built. The view of the town depicts a couple taking a stroll with the woman dressed in a Bloomer costume: an outfit named for Amelia Bloomer consisting of loose fitting ‘harem’ trousers, like those worn by women in the Middle East and Central Asia, under a short skirt.

The weight of multiple petticoats required to achieve the full skirt fashionable at the time caused editor Amelia Bloomer to advocate for dress reform in her publication The Lily: “The costume of women should be suited to her wants and necessities. It should conduce at once to her health, comfort, and usefulness; and, while it should not fail also to conduce to her personal adornment, it should make that end of secondary importance.”

Bloomer was not the first to adopt the bifurcated costume. Both New England temperance activist Elizabeth Smith Miller and actress Fanny Kemble began wearing what they considered to be the more rational trouser costume during the day. Miller showed her trouser outfit to her cousin Elizabeth Stanton who wore one when she visited Amelia Bloomer. Bloomer immediately took up the fashion and it was her name that became associated with the style. Subjected to ridicule in the press and harassment on the street, Bloomer stopped wearing the fashion named for her in 1859, saying (surprisingly) that the crinoline was a sufficient reform from conventional dress as the crinoline took the place of multiple petticoats.

The bloomer costume survived in the form of bathing and gymnastic sportswear, as well as another name for pantaloons or knickers. Like Vivian Maier’s collection of photography, another stash of historically important images have recently surfaced. The bulk of this cache consists of posed portraits and candid shots from ‘private parties’ of drag queens at “The Colony”, a Kansas City night club during the pre-Stonewall era of the late 1950s and 1960s. The images exist in slide form and were recovered in two separate incidents by Robert Chase Heishman and Michael Boles. Heishman discovered a slide carousel – labeled “Jack’s Slides: Chicago and Kansas City” in 2006 amongst the rubble of a salvage yard in Kansas City. Two years later, while helping a friend move, Boles discovered a shoe box of slides as well as some letters from the same ‘Jack’ identified on the carousel.

In 2012 the two men learned of each other’s discovery and realized their finds were by the same photographer. Heishman and Boles pooled their collection of over 150 images and created the Private Birthday Party collection.