I am often asked “How did they used to keep their clothes clean?” Various forms of dry cleaning have been around for centuries, and many garments such as wool suits were wet washed that today we wouldn’t consider washable. The origins of modern dry-cleaning date to the middle of the 19th century when non water-based solvents like mineral spirits (turpentine) were used to clean garments. The less flammable Tetrachloroethene (aka perchloroethylene) displaced mineral spirits in the 1930s.

I have been collecting hangers for a while, and so I thought I would start researching the history of some of the establishments that printed their company name on the hangers. There used to be many independent laundries who offered wet-cleaning services for garments like men’s shirts, collars, and cuffs, and diapers, as well as dyeing (and bleaching) services. Dry cleaning required using flammable solvents, and many cities required the cleaning process to be done outside of city limits. Because of this, the dry cleaning industry was one of the first to become operated by large companies who had a central facility for cleaning outside city limits and multiple store fronts within the city.

The Pearl Laundry Company was founded by David Charles Knipfel, at 90 Queen Street South, in Kitchener. The c. 1918 building, with its name set in stone, still stands. The business was sold in 1946 to Abraham S. Uttley, who had founded his cleaning and dyeing firm Berlin Dye Works, in 1905.

(Addendum: Libby Wheeler and Jim Uttley, grandchildren of Abraham Uttley, wrote with memories of working for their grandfather steam pressing men’s shirts or using the mangle to iron the sheets and towels from local hotels. Libby supplied the above image. She also supplied this local newspaper article about her grandfather from 1969.)

Uttley resold Pearl Laundry in 1966 to Newtex Ltd., but continued to work with the new owners until his 90th birthday in 1969. Newtex currently operates three dry cleaning locations in Kitchener, but the former Pearl Laundry location is no longer one of them.

I run across a variety of cleaning tips in old magazines etc. and I am sure some of them are good…  Here is one from the back of a cigarette card that I doubt I will be trying anytime soon, but maybe it works: 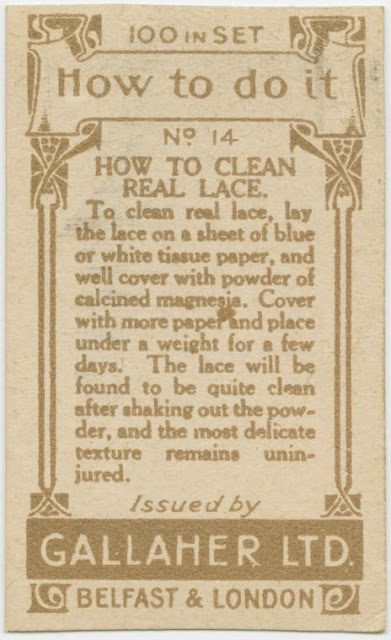 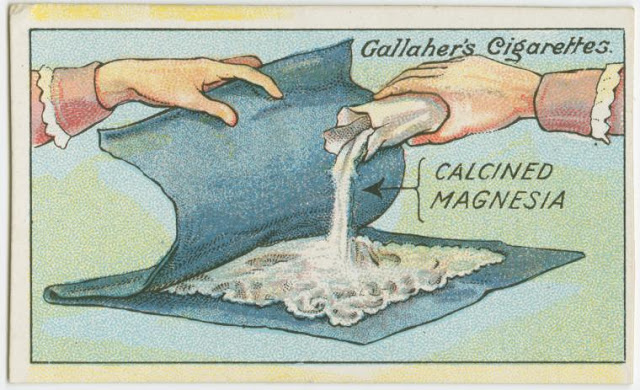 In about 1910, the English tobacco company, Gallaher’s Cigarettes, printed a series of 100 “How to do it” cards that included everyday useful and helpful tips including these three for boot and shoe care: 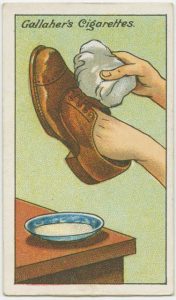 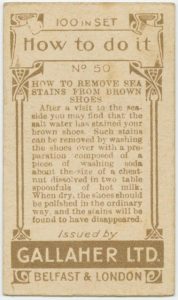 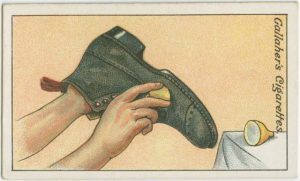 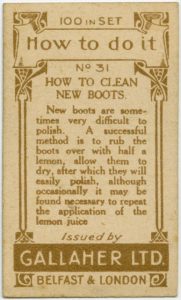 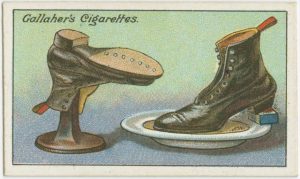 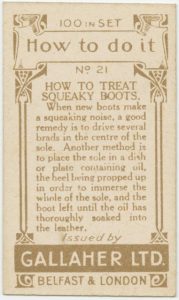 I was giving a lecture last night about the historical use of felt in fashion and was asked about how to care for felt. As felt is made of animal fibres, moths are potentially the worst problem and so I explained my environmentally-friendly, sure-fire method of moth prevention. I discovered how effective this method was in February 1994 when I was moving between two apartments in Toronto in the middle of the coldest winter in decades (even colder than this past winter.)

I usually make sure I keep new acquisitions out of the storage room until I am sure they are pest free, however, something I acquired (I think it was a Canadian Women’s Army uniform) slipped in under the radar and within a few weeks the collection was all ‘a flutter’. As I went through the racks it was interesting to note that the moths preferred soft wools like cashmere over hard spun woolen twills, and gravitated to fur instead of wool, and were drawn to light coloured fur over dark coloured fur. The worst infestations were in a rabbit and ermine fur coat from the 1920s and two white fox stoles. Those items were too riddled to save and were thrown out. However, the rest of the collection was largely spared but needed treatment.

I had heard of the freezer method and as I was moving in a few days and the weather was in the negative double digits, I used the cold to my advantage by putting the collection into the truck the night before our move. The quick freezing didn’t give time for the moths to acclimatize and effectively killed the worms and adult moths. After a thorough vacuuming and inspection a 1950s cashmere blend suit had to join the fox stoles and ermine coat, but everything else was fine.

I should have posted this blog during the last few months when there was still plenty of cold weather around, but when its not below freezing outside, I use the freezer compartment of the fridge, but do it twice to be sure (freeze for 24 hours, thaw for 12 and freeze for 12) and I swear by this method. I even use it as a part of the standard acquisition process for all furs entering the collection.