In 1834 William Samuel Henderson arrived in Quebec City from Londonderry, Ireland and joined the retailing firm of Ashton and Co. In 1837 he bought a controlling interest in the business that sold fur muffs, boas and tippets. By 1847 Henderson had renamed the company after himself. The first of many name changes over the years that reflected the various partners who came and went.  In 1862, George Richard Renfrew came in as a partner and in 1867 John Henderson (William’s brother who had bought out William) retired. 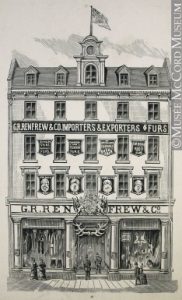 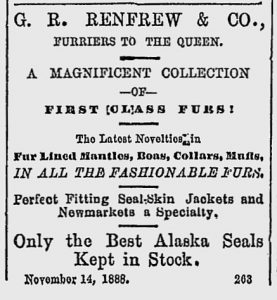 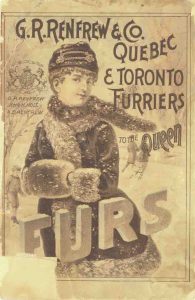 The company built its reputation on furs, receiving numerous medals at expositions in London, Paris and Philadelphia. Their first Royal Warrant from Queen Victoria was issued in 1886 as furriers to the Queen. Later Royal Warrants were granted by Queen Alexandra in 1901, Kind Edward VII in 1907, King George V in 1910, and Edward Prince of Wales in 1921. G. R. Renfrew expanded to Toronto in 1889, around the time a new partner was brought on – John Holt, In 1908 the company’s name was changed to Holt, Renfrew & Company.

In 1910, the company expanded to Montreal and Winnipeg. In 1933, during the Depression, Holt Renfrew sought to capture the luxury fashion market and began to carry clothes from the best London tailors, Paris couturiers and New York designers. An Art Deco style flagship store was opened in Montreal in 1937 in honour of the company’s centennial.

In 1947 Holt Renfrew supplied Canada’s official wedding gift to Princess Elizabeth with a Labrador wild mink coat. The company prospered postwar  with additional stores opening in Edmonton in 1950, Calgary and London in 1953, as well outlets in some of the Canadian Pacific hotels: Royal York, Château Frontenac, and Château Laurier. Holt Renfrew was also one of the first high-end retailers to locate in a shopping mall at Toronto’s Yorkdale Shopping Centre in 1964 and Place Ste. Foy in Quebec in 1965.

In 1951 Holt Renfrew began an exclusive arrangement with Christian Dior to carry his Paris designs, reproduced in Montreal, and sold through Holt Renfrew. Similar agreements were struck with Simonetta later in the 1950s and Yves St. Laurent in 1962. In 1955 Dior visited Toronto and attended a fashion show at the new Holt Renfrew store in Toronto. In 1960 a new ready-to-wear line was introduced for young women called Miss Renfrew marketed to “Young Careerists, College Girls, and Young Matrons” who wished to dress fashionably on a budget.

Holt Renfrew was purchased by the New York CIT Group Inc in 1965 and resold in 1971 to the American retail chain Carter Hawley Hale Stores, which also owned Neiman Marcus and Bergdorf Goodman at the time. By 1975 when a new store was opened in Vancouver, the chain had grown to 24 outlets. In 1979, head office was moved to a new flagship store in Toronto from Montreal where the political separatist climate in Quebec was making corporations nervous.

The company returned to Canadian ownership when Galen Weston bought the chain in 1986. Weston and his wife, Hilary, revitalized the chain, opening designer boutiques within newly renovated stores. A magazine was launched in 1987 called ”Point of View”, which was renamed ”Holts” in 2000, and divided between women’s and men’s editions in 2006. Under the auspices of Galen Weston’s daughter Alannah, the chain rebranded itself and adopted a new ‘HR’ logo in 2005. The company remains one of the leading stores for high end fashion in Canada.

Jonathan Walford is a fashion historian and co-founder of the Fashion History Museum in Cambridge, Ontario. The FHM maintains a collection of nearly 12,000 artifacts dating from the mid 17th century to the present. Jonathan has authored various books and museum catalogues, including The Seductive Shoe, Shoes A-Z, Forties Fashion, 1950s American Fashion, and Sixties Fashion.
View all posts by Jonathan →
This entry was posted in Canadian dress, Retailing and tagged Holt Renfrew. Bookmark the permalink.